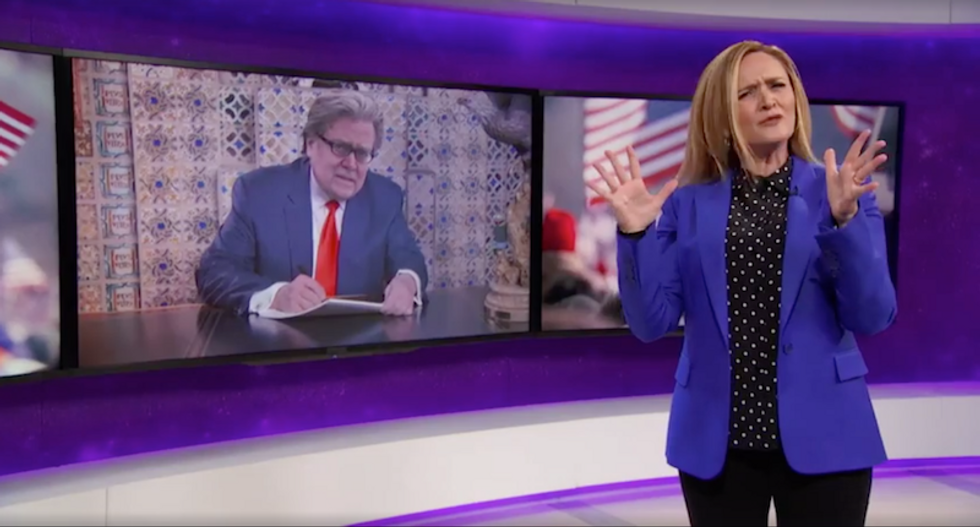 During Wednesday night's segment of Full Frontal, host Samantha Bee ripped into President Donald Trump's inauguration. "America swore in the concept of white male mediocrity," she said, adding that "Donald Trump laid his little pussy-grabbing paw on top of two more books than he’s ever read in his life and spoke the most solemn vow he’s uttered since his third wedding."

Bee commented on the white supremacist and Nazi overtones of Trump's "America First" inauguration speech, which Steve Bannon helped write. Bee referred to Bannon as a "Goldman Sachs wormtongue who tells you what to say" noting that Bannon "is filling [Trump's] mouth with more Nazi code than Enigma."

"Are you the only 70-year-old in America that doesn't watch the History Channel?" she asked.

Later in the segment, she slammed Trump's concert as "male, overwhelmingly white, and devoid of any A-list talent," comparing it to his White House cabinet.

"As the curtain goes up on 'Shit Show: The Musical,' I want you all to take the hands of the people sitting next to you, squeeze tight and remember, really remember, that the president could only get Three Doors Down to play at his inauguration," she said.