'Stunned disbelief': Dan Rather slams Trump for siding with Assange over US intel 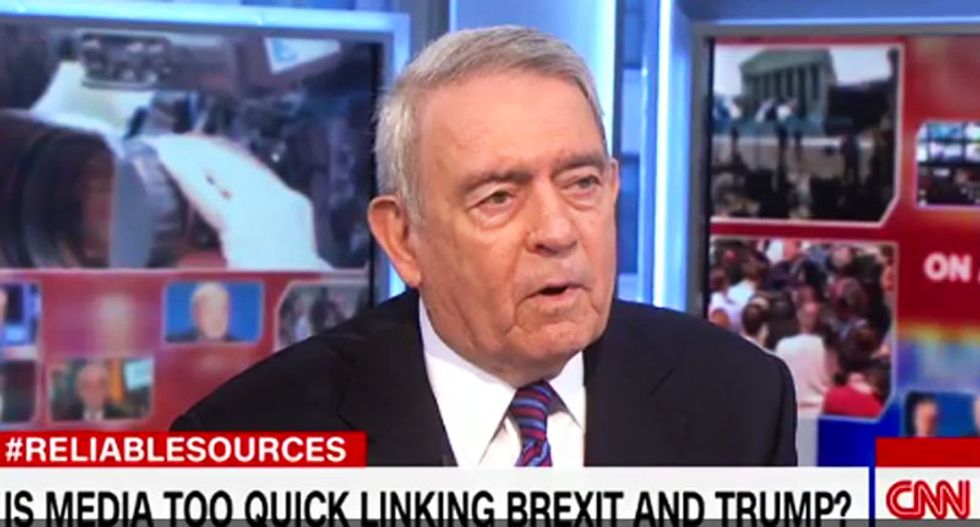 Dan Rather on CNN - (screen grab)

“Stunned disbelief. Anxiety. A mounting sense of betrayal,” Rather wrote in an essay posted on Facebook. “These are the smoke signals rising from those in and around the United States intelligence community over President-elect Donald Trump's dismissal of the evidence of Russian hacking in the presidential election.”

Referencing Trump’s tweets Wednesday morning that seemed to give more credence to WikiLeaks founder Julian Assange than the U.S. intelligence community, Rather mocked the president-elect's willingness to believe a well-known adversary of the United States:

“Assange, in an interview with Fox News' Sean Hannity (who at this point must be considered a full-fledged propagandist and abetter) said he didn't get the information from Russia. Well if he says so... Let's just use that same standard for all of our adversaries. Nothing to see here. Why waste all these billions of dollars on intelligence gathering?”

Rather noted while “there must be caveats” when accepting intelligence, the potential “concerns are secondary.

“The agencies seem to be speaking largely in unison with the urgency of real evidence,” Rather observed.

The Dan Rather Reports anchor wondered what the “network of people risking their lives” or “using their immense analytical skills … instead of … making millions on Wall Street" must “think of Mr. Trump's cavalier dismissal of their work.”

Calling Russian hacking “a matter of national security,” Rather warned that Trump’s refusal to accept the intelligence “affects all Americans, and people around the world.”

“Hopefully patriots within Mr. Trump's own party and in his inner circle will step up and tell the incoming president how dangerous this rhetoric is,” he concluded. “Heaven forbid we suffer another horrible attack. Heaven forbid our intelligence community was hollowed out, wasn't listened to or respected. These are the stakes.”