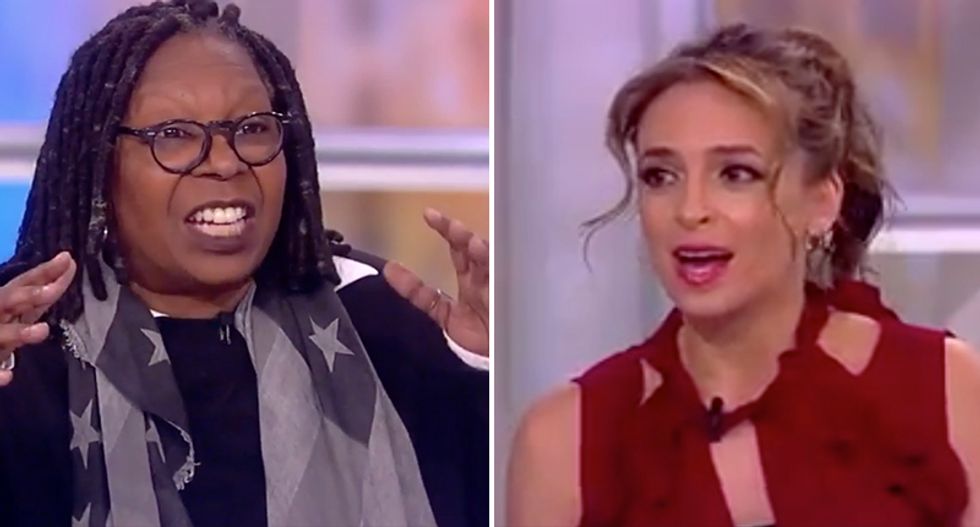 The women on "The View" got into a heated discussion over President Donald Trump's recent firing of Acting Attorney General Sally Yates when she refused to enforce his immigration ban. Yates announced that she believed the ban was unconstitutional and encouraged Justice Department staff not to enforce it.

Co-host Joy Behar remarked that Trump's claim Yates engaged in "an act of betrayal" like Henry VIII shouting "off with your head!"

Hostin said that every day of her job as a federal prosecutor she greeted the "ladies and gentlemen of the jury" by saying "I represent the people of the United States. You say it every day. She's his legal adviser. She can't send prosecutors in there to defend something that she thinks unconstitutional."

Conservative and former Fox News contributor Jedediah Bila sided with the Trump administration. While she is not an attorney she said that she contacted lawyers she knew who said that her job is to enforce the law and that the president enacted a law. "In other words, the president is the guy there to make these laws. If she objects her job is to resign."

Co-host Whoopi Goldberg played a clip of Yates' confirmation hearing when Sen. Jeff Sessions (R-AL) asked if Yates was capable of standing up to the president and upholding the Constitution.

Bila brought up Kim Davis, the County Clerk who refused to enact the decision made by the Supreme Court to legalize same-sex marriage. That's when Goldberg began shouting.

"She wouldn't uphold the law!" Goldberg exclaimed. "She did that based on her religious beliefs... What [Yates] did, she said, 'I can't tell you guys to do this because I'm not sure this is legal.'"

Goldberg also noted that another problem is that the White House is simply throwing these executive orders out without coordinating with Congress or the agencies and that people are "scrambling" as a result.

"So when we need to know there's no time taken to see what the legality is, where it's wrong or right to correct it," Goldberg continued. "The same issue I'm finding when I hear this kid who's the mouthpiece — Sean Spicer. When he says, 'Diplomats around the world, if you don't like it, leave.' Here the deal, these people are telling you -- they're your advisers. Is this the same that Trump was bitching about when he was talking about Benghazi. They told you what was happening. No one was listening."

"If you're the Attorney General and you're going to say, 'I'm not going to support this law because it's illegal and unconstitutional,' aren't you obligated to people why it doesn't uphold the Constitution?" Bila asked.

"No, no, no," Goldberg cut in. "If you're talking to the people who work for you and they're saying what do we do? Do we go through? She has to say I don't know. I need to check because I don't think this is legal."

"You can't as Attorney General make the decision not to enforce the law!" Bila exclaimed.

"No, you're -- listen," Goldberg said. "What you're saying is incorrect." Bila began shaking her head. "What she said -- how do you know what I'm saying? 'I think this might be illegal so I'm not going to enforce it,'" she clarified.