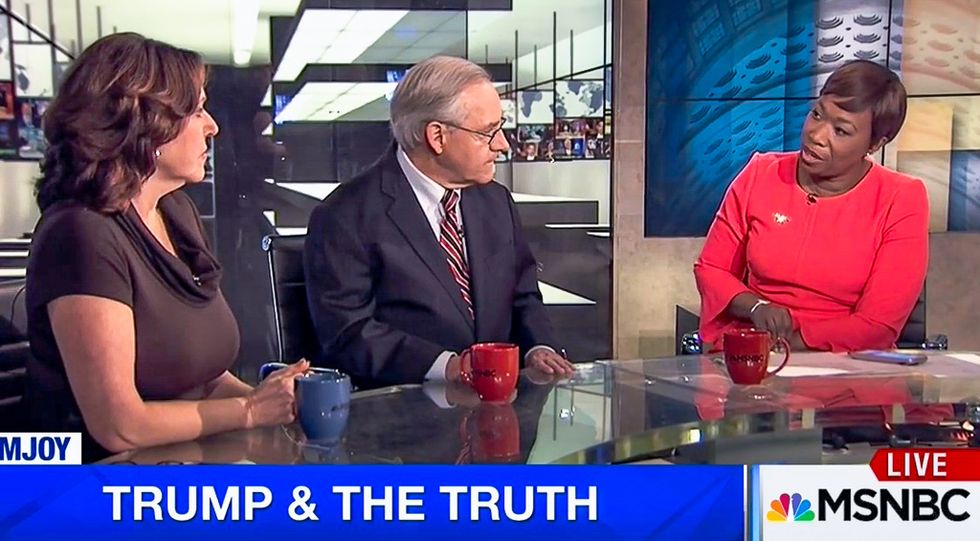 During a discussion about the future of the Affordable Care Act, MSNBC host Joy-Ann Reid pointed out that Trump's White House was already lying about how the GOP's plan to "replace" Obamacare would leave millions without insurance.

"People are being hurt by their coverage being diminished, by their opportunities to get insurance being diminished," Reid explained. "And [White House Press Secretary] Sean Spicer comes out and says, 'No, they're not. Nobody is suffering.' And then you try to find the data on people's insurance and HHS just doesn't give it to you."

"That's where we are," MSNBC analyst Joan Walsh agreed. "I think we're really in a place where they're going to scrub the data. They're scrubbing websites now. And it's really a challenge. I know a lot academics and others who are working to preserve the data that they already have."

"They're going to make it seems like, 'Oh, well, Obamacare. We told you it's falling apart,'" Walsh added.

MSNBC contributor E.J. Dionne predicted that the Trump administration would use a "smokescreen" to hide the fact "that it's their plan that is pulling coverage from people."

"Our government produces enormous amounts of good data," Dionne remarked. "Republicans, Democrats have all said, 'We want honest data from the government because this helps business, this helps civic groups, this helps people all over the country.'"

"We have a situation where we maybe won't be able to trust the data that's coming out," Reid lamented. "And you know what? Republicans in Congress, it's not clear that they're going to do anything to protect the Congressional Budget Office or to protect anything other than Donald Trump."