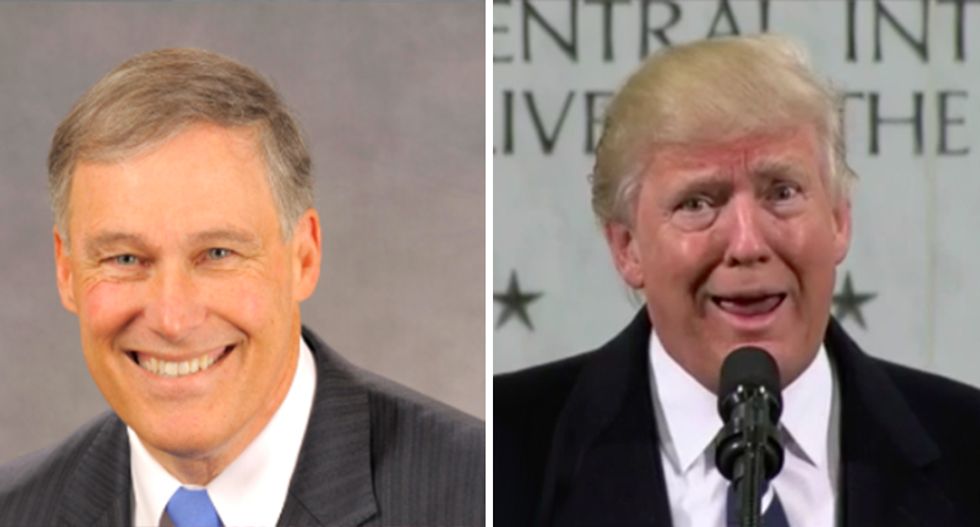 The governor of Washington lashed out at the Trump administration on Saturday over the "train wreck" of a mess caused by Trump's sweeping executive orders banning immigration from some Muslim countries and invalidating the visas of some legal residents, leaving them stranded in limbo at airports around the country.

"These people couldn't run a two-car funeral," said Gov. Jay Inslee (D) at a press conference at Seattle-Tacoma International Airport on Saturday, according to the Seattle Times. “It is a train wreck. It can’t stand. We’re drawing the line here at Sea-Tac.”

The executive order bans entry to the U.S. for all refugees for 120 days. Syrian refugees are barred indefinitely and the order imposes a 90-day wait on travelers from Iran, Iraq, Libya, Somalia, Sudan, Syria and Yemen.

Inslee compared the situation to the internment of Japanese-Americans during World War Two.

Trump's orders were written so broadly that Customs and Border Control agents have been forced to improvise with regards to how to implement them. Reuters said that in the resulting "chaos," travelers have been stranded, detained or forced to return to their flights' points of origin with no warning.

The order is worded in such a way that even those holding current green cards and living in the U.S. as legal residents are subject to deportation as they try to re-enter the country.

Port of Seattle Commissioner Courtney Gregoire said that the airport and Customs employees struggling with how to implement the new president's orders are "hardworking federal employees under tremendous strain.”

“As best they could explain it, the facts of the executive order were dictated to them," she said.

Lawyers from the ACLU and other immigrants' rights group converged on the airport along with more than 1,000 protesters who chanted, "Let them in! Let them in!" in solidarity with the detained travelers.

U.S. Rep. Pramila Jayapal, D-Seattle -- an immigrant herself -- told the Times that her message to the president is that this order is “inhumane and barbaric.”

Police were declining to arrest the protesters who they said were there at the airport legally expressing their views as protected under the First Amendment.

Airport officials said they are making conference rooms available for families to wait for travelers to arrive rather than making them stand in the baggage area.

On Saturday evening, a federal judge in New York City granted an emergency stay allowing everyone who landed with a visa to be released and allowed to complete their journeys. However, the stay was narrow and temporary in scope and a newly alarmed nation is waiting to see what happens next.

Clark Kauffman, Iowa Captial Dispatch
An Iowa nurse accused of using a bed sheet to tie an elderly woman to her wheelchair will keep her license but must complete 30 hours of education on patient management.

Last month, the Iowa Board of Nursing filed a combined statement of charges and final order in a case involving Valerie Archer of Corydon. According to the board, Archer committed an act that may have adversely affected the health of a patient.

The board alleges that while Archer worked at an unspecified care facility on Dec. 11, 2021, she “placed a sheet around a resident” in a manner that acted as a restraint.

According to Ukraine's armed forces, Russia's military is circulating a document called "Conclusions of the war with NATO in Ukraine," which declares that 5 million Russian troops must be deployed in order for Russia to win, Ukrayinska Pravda reports.

During a briefing, deputy head of the Main Operative Directorate of the General Staff of the Armed Forces of Ukraine, Oleksii Hromov, said that the documents says the main problems of the Russian occupying forces are "the commanders’ inability to command troops, low level of discipline and military training, obsolescence of armament and military equipment, commanders’ inability to make decisions without obligatorily coordinating them with higher command etc."