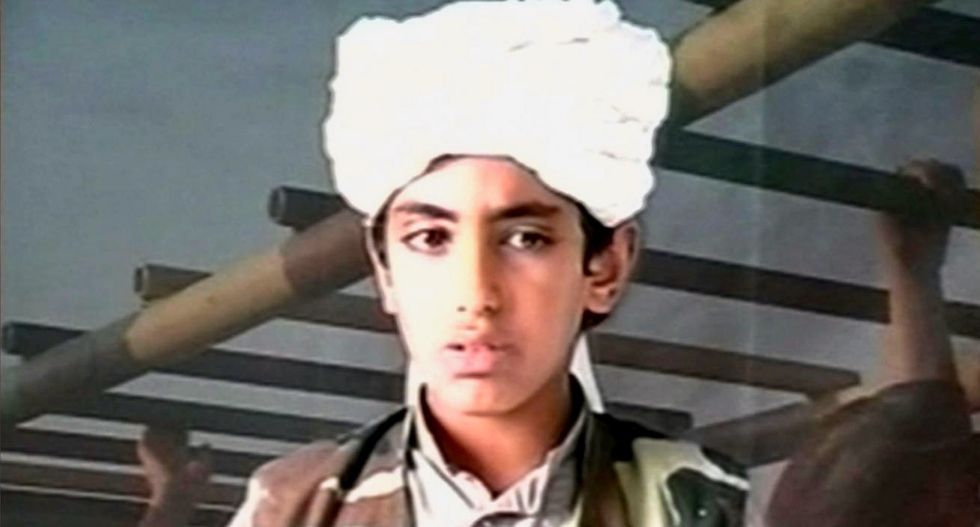 Hamza, who is in his mid-twenties, has become active as an Al-Qaeda propagandist since his father's death at the hands of US special forces on May 2, 2011.

According to letters found in the Navy SEAL raid on Osama's hideout in Pakistan, Hamza wrote to the Saudi-born Al-Qaeda leader asking to be trained to follow him.

A CIA analyst who examined the letters told AFP that, in July 2009, when Hamza wrote to his father's Abbottabad hideout, they had not seen each other for eight years.

But the elder bin Laden was making plans to send for his son, who was at the time under house arrest in Iran, and planned to groom him to become Al-Qaeda's leader.

Since bin Laden's death, his Egyptian deputy Ayman al-Zawahiri has taken up the reins of the organization, but Hamza has also issued audio messages to supporters.

Last year, the fifth anniversary of the death of the man who ordered the 9/11 attacks on the United States, experts began to note the young heir's increasing prominence in the movement.

The US Treasury sanctions list estimates that Hamza was born in 1989 in the Saudi city of Jeddah. His mother was Khairiah Sabar, one of bin Laden senior's three wives.

The State Department order names Hamza bin Laden as a "Specially Designated Global Terrorist" and freezes any assets he may hold in areas under US jurisdiction.

The department also designated Ibrahim al-Banna, whom it described as a senior leader in Al-Qaeda's Yemen-based franchise, Al-Qaeda in the Arabian Peninsula (AQAP).

US citizens and companies are forbidden for conducting any business with designated terrorists, and law enforcement agencies around the world are alerted to their status.

In an undated audio message released in August, Hamza bin Laden urged his Saudi supporters to rebel and overthrow the kingdom's rulers.

Earlier, in a message released in May, he urged the jihadist factions fighting in Syria to unite, arguing that the "blessed Syrian revolution" would lead to "liberating Palestine."

He had previously issued a call for Muslims living in the West to rise up and conduct spontaneous attacks of the kind seen recently in European cities.

According to the documents seized in Abbottabad and seen by AFP, the younger Hamza boasted to his father that he was "forged in steel" and ready for "victory or martyrdom."

"What truly makes me sad is the mujahidin legions have marched and I have not joined them," Hamza wrote to his father in July 2009, according to an English translation provided by the CIA.

"I dread spending the rest of my young adulthood behind iron bars," he added, writing while in Iran, where some bin Laden relatives fled after the US invasion of Afghanistan.

"My beloved father, I announce to you that I and everyone, God be praised, are following on the same path, the path of jihad."

It was not possible to independently verify the origin of the documents or the accuracy of the CIA translation.

Hamza described the "pain of separation" he felt at age 13, when Al-Qaeda's senior figures were separating for security reasons, and his hopes of a reunion.

"You bid us farewell and we left, and it was as if we pulled out our livers and left them there," he wrote.

The jihadist commander argued that the least dangerous option was sending him through Pakistan's Baluchistan province, which borders Iran, to the crowded port city of Karachi.

Meanwhile, Abd al-Rahman had arranged for Hamza "to attend a course on explosives" and had promised him firearms training, adding that the young man was "very sweet and good."

But a month after the plan was suggested, bin Laden senior was dead, and it is not now clear whether Hamza is still in Iran.