US warns over anti-American violence risk in Turkey 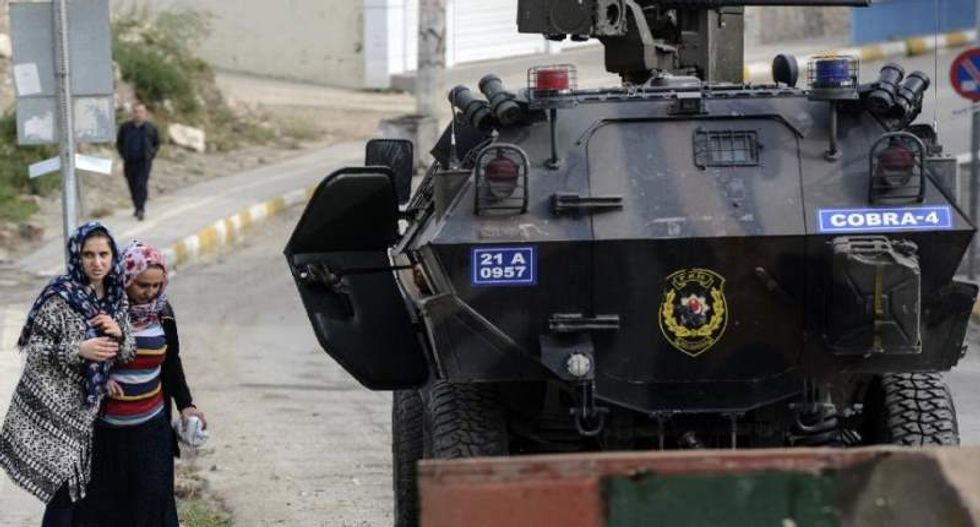 People walk by a military vehicle in a street of Silvan, Turkey during a curfew following clashes between Turkish forces and Kurdish militants on Nov. 10, 2015. (Photo by Ilyas Akengin for Agence France-Presse.)

The United States embassy in Turkey on Thursday warned against the risk of attacks against its citizens in the country after a rise in anti-American rhetoric.

Turkey has been hit by a slew of attacks over the last months claimed by jihadists and Kurdish militants that have left the country on edge.

In the latest strikes, 39 people were gunned down in an attack on New Year's night claimed by Islamic State (IS) jihadists at an Istanbul nightclub.

Just three weeks earlier, 46 people were killed in a double suicide bombing claimed by Kurdish militants close to the stadium of the Besiktas football club.

The attacks prompted claims in the radical conservative press that the United States had a hand in the violence, although the allegations have been repeatedly and angrily denied by the embassy.

"An increase in anti-American rhetoric has the potential to inspire independent actors to carry out acts of violence against US citizens," the embassy said in a travel warning.

An October order for family members of employees posted to the US Consulate in Istanbul to depart Turkey temporarily remains in place, it added.

Meanwhile, all US government travel to Istanbul is subject to State Department approval, it said.

This is based on intelligence "indicating extremist groups are continuing frequent and aggressive efforts to attack US citizens and foreign expatriates in areas of Istanbul where they reside or frequent," it said.

The alleged mastermind of the plot, the preacher Fethullah Gulen, lives in the United States but has denied any links to the putsch.

Washington has so far not yielded to persistent Turkish requests to extradite Gulen, increasing tensions in relations and rasing the hackles of Erdogan's supporters.

In another sign of the poor atmosphere, Erdogan on December 27 accused the United States of supporting "terror groups" in Syria, even including Islamic State (IS) jihadists.