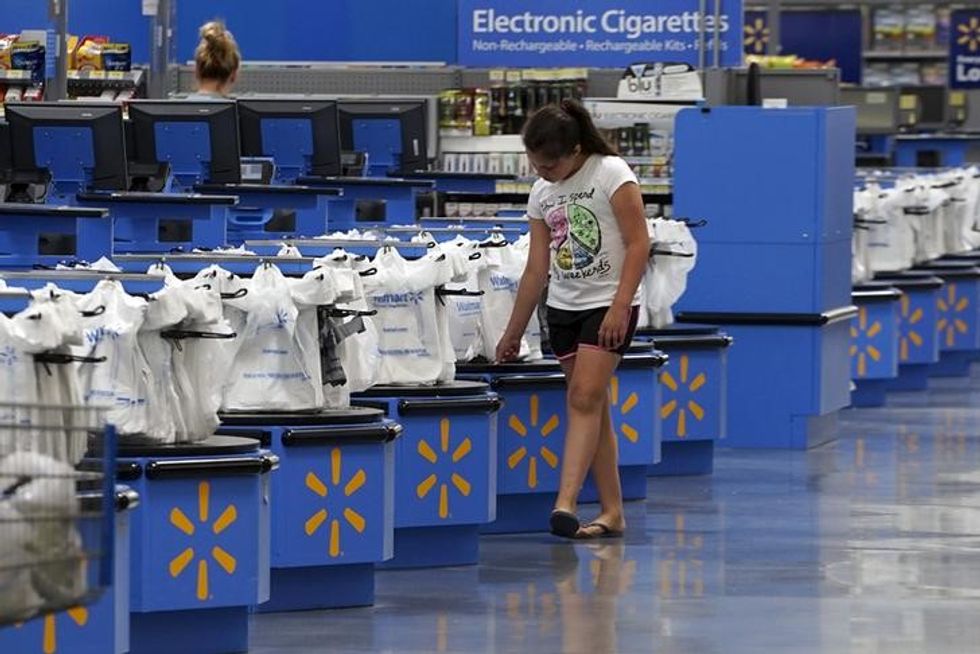 A girl walks along the checkouts at the Wal-Mart Supercenter in Springdale, Arkansas June 4, 2015. REUTERS/Rick Wilking

Wal-Mart Stores Inc has been ordered by a federal judge to pay $16.08 million to a former New Hampshire pharmacist in a gender bias case, but the amount is only about half what a jury awarded and may fall substantially further.

U.S. District Judge Steven McAuliffe also asked the New Hampshire Supreme Court to advise whether the plaintiff Maureen McPadden was entitled under state law to any of the $15 million of "enhanced" damages that comprised most of the award.

Though "reasonable minds can differ," Wal-Mart "asserts - not implausibly" that such damages are not available, the Concord, New Hampshire judge wrote on Jan. 6.

Wal-Mart had no immediate comment on Tuesday, but the Bentonville, Arkansas-based retailer has said it does not tolerate discrimination.

McPadden accused the world's largest retailer of using her loss of a pharmacy key as a pretext for her November 2012 dismissal from a store in Seabrook, New Hampshire, after more than 13 years at the retailer.

She said Wal-Mart actually fired her in retaliation for her raising concerns about whether prescriptions were being filled properly. McPadden also said her gender played a role, saying a male pharmacist who later lost his key was not fired.

Jurors originally awarded McPadden $31.22 million, a sum that McAuliffe said was "to say the least, startling."

The judge later reduced the punitive damages component to $300,000 from $15 million as required by federal law, and in a Jan. 5 order said McPadden deserved just $111,591 of front pay, one-fifth what the jury had awarded.

Wal-Mart had sought to overturn the entire verdict, but McAuliffe rejected that request in September.

Rick Fradette, a lawyer for McPadden, said that if enhanced damages were ever warranted, "it is where the world's largest private employer continues to discriminate against women in the 21st century.

"Wal-Mart's posture has been that it will fight this to the end," he said. "We'll see what the New Hampshire Supreme Court has to say."