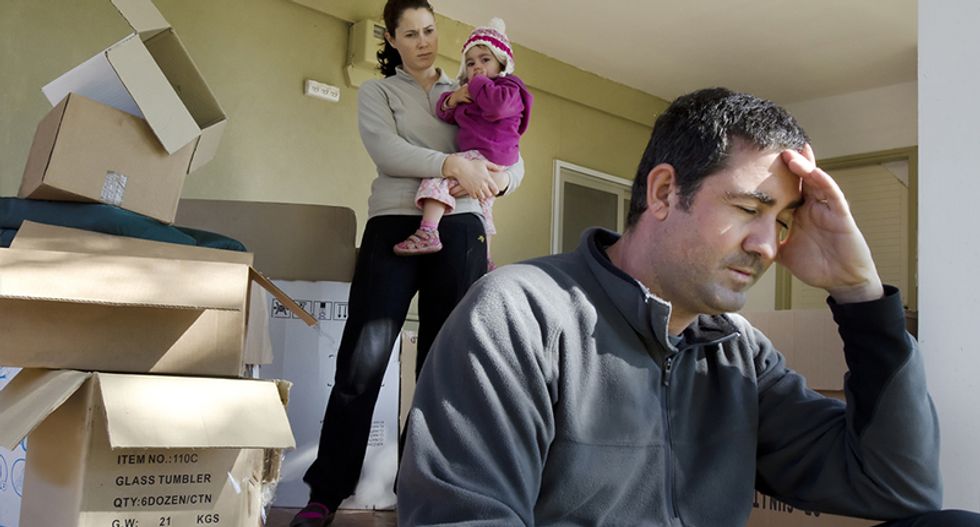 Big mortgage lenders were part of the crash on Wall Street and they were also part of the Emergency Economic Stabilization Act of 2008 passed by President George W. Bush that bailed out the banks. Just 8 years later, some mortgage lenders are getting into the landlord business, driving up the cost of rent and evicting people from their homes.

According to a Bloomberg News report, draws attention to a company called HavenBrook Homes. The company is controlled by massive money manager Pacific Investment Management Co. For those lenders that lost their shirt in the crash, hedge funds, private equity companies and investment firms helped flip empty houses into rental properties.

In Georgia, companies like HavenBrook Homes are twice as likely to file for an eviction notice than a smaller owner. American Homes 4 Rent is another company known for quickly pulling triggers on evictions. The two companies serve them to a quarter of the homes they own, where others serve evictions to 15 percent of their properties, Bloomberg cites Ben Miller, a George State University professor that helped create a report. But Colony Starwood Homes is the winner, serving evictions for one-third of their homes.

While landlords were once mom and pop operations or run by small property management services, they've now become large-scale operations. They once turned a profit by foreclosing on homes but now they're taking people to court to collect on rent or process evictions. The cost is a surprisingly low $85 in court costs and only $20 to have the person ejected. Some companies actively induce the evictions by moving extremely slow in making repairs. When renters withhold their rent as a result, the company moves to evict.

That's what happened to Juliana Spence when she was forced to deal with Colony Starwood Homes. The 41-year-old mother of five told Bloomberg that a faulty fan racked up $800 in electric bills. A pipe leak caused her family to have a $400 monthly water bill. The company was slow to fix and ultimately issued her an $1800 credit. The repairs they made, she said, were Band-Aid fixes and her costs went up again. Ultimately, she fell behind on her rent and was quickly evicted.

“They do makeup work,” Spence explained. “They made the walls look nice. They put some new appliances in. But the gut of the house is the same.”

“My hope was that these private equity firms would provide a new kind of rental housing for people who couldn’t -- or didn’t want to -- buy during the housing recovery,” said the report's head author, Elora Raymond. “Instead, it seems like they’re contributing to housing instability in Atlanta, and possibly other places.”

Aaron Kuney, once worked as HavenBrook’s executive director of acquisitions. He explained that companies do want to keep their tenants to avoid the cost of turnover, but if they can't pay they want them out and fast.

“Finding people these days to rent your homes is not a problem,” said Kuney, who now serves as the chief executive officer of Piedmont Asset Management, another private equity landlord in Atlanta.

Reiton Allen, 44, was one of those evicted. The father of two works as a truck driver but childcare got too expensive and he fell behind when his rent was raised over $900.

He's not in a unique situation. Rental prices have increased in areas all over the country. A Harvard Joint Center for Housing Studies report last year detailed that 21.3 million people spent more than a third of their income on Housing in 2014. Worse, 11.4 million spent half of their income on housing. Homeownership fell to a 51-year low that same year.

Bloomberg cites Atlanta's Federal Reserve, which revealed their own research that shows landlords like this might be destabilizing the housing market in the state. Their research is based on 2015 court records that show hundreds of thousands of homes were snatched up by Wall Street companies. Evictions are also predominantly in poor neighborhoods and those known for being communities of color.

Colony Starwood Homes was founded by Tom Barrack, who also happens to be the chairman of U.S. President-elect Donald Trump’s inauguration committee. He still holds the majority of its stock.