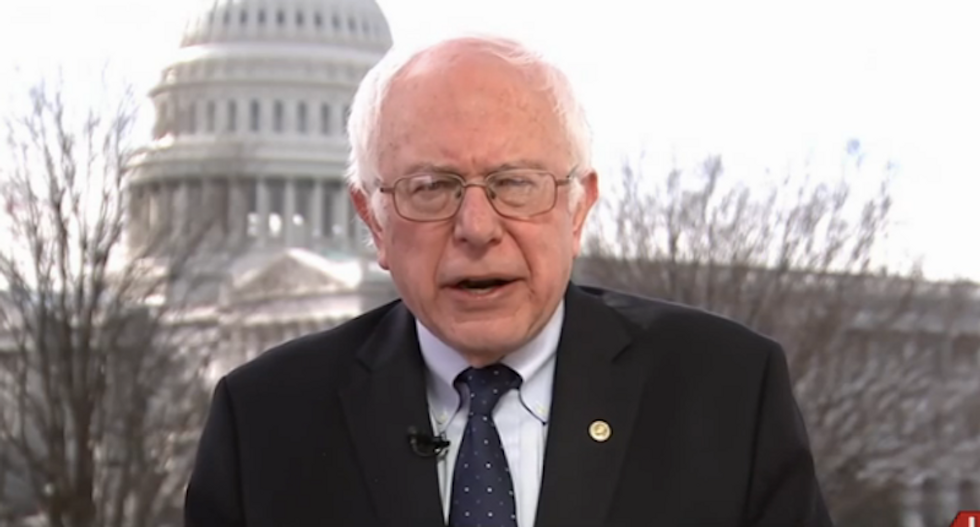 On Thursday's Morning Joe, Sen. Bernie Sanders (I-VT) once again made his pitch for the future of the Democratic party, calling on Democrats to rebuild the party at the grassroots in every state.

"We need to reach out to working people and young people all over this country," Sanders said on MSNBC. He also promised to fight the repeal of the Affordable Care Act. On early Thursday, the Republican-led Senate took their first major step towards dismantling Obamacare, voting 51 to 48 to pass a repeal resolution.

"No, you're not going to repeal the Affordable Care Act, throw 30 million people off of health insurance, raise the cost of prescription drugs for seniors. You're not going to do that. We're going to fight and organize at the grassroots level," Sanders pledged.

Asked if the Democratic Party had neglected grassroots organizing, Sanders unequivocally said yes. "There's been an enormous preoccupation with raising money," he said.  Sanders also repeated the call to create a "50 state party" instead of abandoning red states to Republicans. "I'm going to be going to Alabama, I'm going to be going to Mississippi. We're going to do everything we can to fight voter suppression, to reactivate grassroots politics in this country," he promised.

He pointed out that the Democratic party needs to address the interests of working people, not the billionaire class.

"If the billionaire class hates me, or hates other progressives, we should be proud of that, because we've got to start identifying with the working people who have seen their jobs go to China and Mexico, the people who are making 10 bucks an hour, the elderly people who can't afford prescription drugs," he concluded. Sanders also said that he is willing to work with President-elect Donald Trump if the incoming administration's proposals would help working people. "Trump has talked about a collapsing infrastructure—roads bridges and water systems. If he is prepared to work with us on rebuilding America's crumbling infrastructure and creating millions of jobs and doing it in a way that doesn't privatize our infrastructure and give tax breaks to billionaires, yes, let's work together."