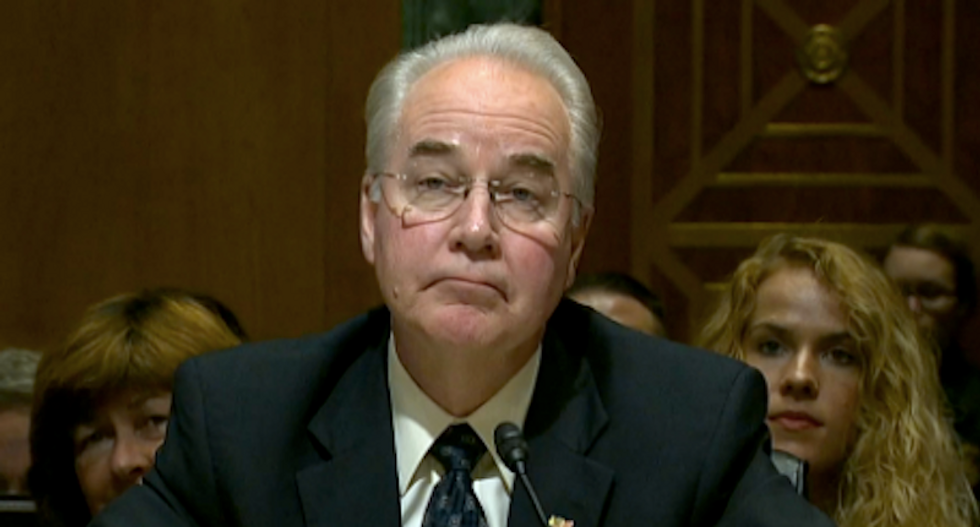 Donald Trump's pick to oversee the Department of Health and Human Services is part of a fringe group of physicians who believe doctors rely too much on scientific evidence -- and a Democratic senator grilled him over his personal views.

Rep. Tom Price (R-GA) is an orthopedic surgeon and member of the Association of American Physicians and Surgeons -- which promoted the falsehood that illegal immigrants were responsible for bringing leprosy into the U.S.

The association's journal published a study in 2005 that claimed 7,000 cases of leprosy had been reported in the U.S. over a three-year period, which the researcher blamed on immigrants and "anchor babies," although publicly available statistics instead found the same number of cases over three decades.

Price told Menendez that any infectious disease, including leprosy or influenza, could be spread through human contact -- and then the Democratic senator asked if he believed abortions caused breast cancer.

"I think the science is relatively clear that that's not the case," Price said.

Menendez asked if he believed that vaccines caused autism.

"Again, I think the science in that instance is that it does not, but there are individuals across our country who are very --" Price said, before the senator cut him off.

"I'm not asking about individuals, I'm talking about science," Menendez said. "You're going to head a department in which science, not alternate universes of people's views, is going to be central to a trillion-dollar budget and the health of the nation."

He then demanded Price promise that he would "swiftly and unequivocally debunk false claims" about public health if he were confirmed, but the GOP lawmaker paused.

"What I'll commit to doing is the due diligence that the department is known for and must do to make certain that factual information is conveyed --" Price began, before the senator again cut him off.

"That information will be dictated by science, I would hope," Menendez said.

"Without a doubt," Price agreed.