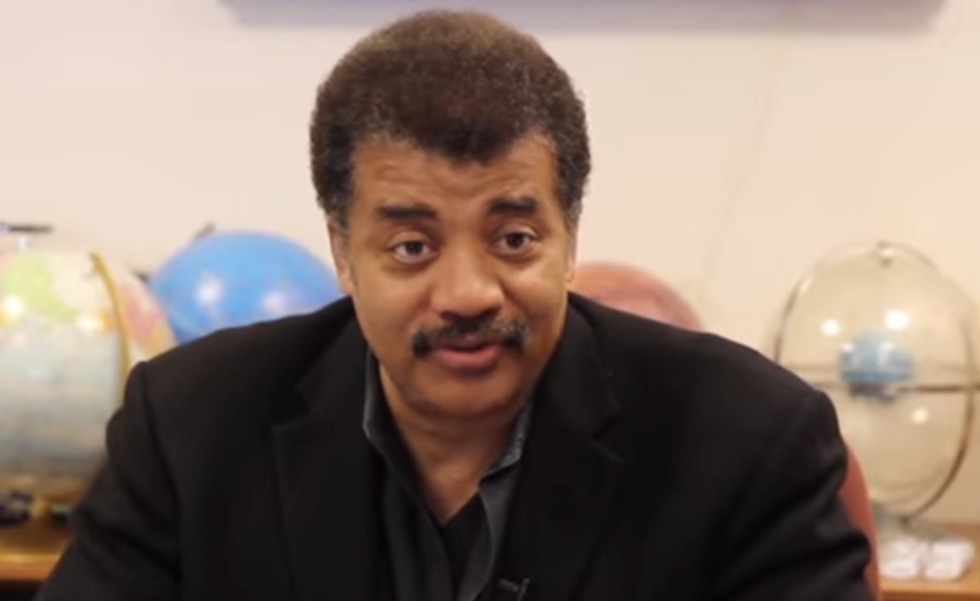 Neil deGrasse Tyson blasted an anti-science skeptic who confronted him at a press conference last week when the man tried to convince him that the Large Hadron Collider is an existential threat to mankind but that HIV is not because it doesn't cause AIDS.

Gizmodo's Ryan F. Mandelbaum was on the scene to watch the astrophysicist bat aside the skeptic's arguments and attempt to explain to the man how scientific consensus works. DeGrasse Tyson said that one lone research paper does not make a significant impact on scientific opinion, especially if no other researchers arrive at the same conclusion.

"The universe is under no obligation to make sense to you," deGrasse Tyson said. "It doesn’t give a rat’s ass how your five senses interact with this world."

DeGrasse Tyson was meeting with reporters after the dedication of the Richard Gilder Center for Science, Education, and Innovation at the American Museum of Natural History in New York City. Among them was conspiracy blogger Anthony Liversidge, whose website Science Guardian maintains that science has fallen prey to "crowd prejudice, leadership resistance, monetary influences and internal professional politics" and abandoned its truth-seeking principles.

Liversidge believes in the crank theory that the European Organization for Nuclear Research (CERN) is putting the planet in jeopardy with its use of the Large Hadron Collider as well as the discredited theories of physician Peter Duesberg, who has claimed since the 1980s that HIV does not cause AIDS.

"When you have scientific inquiry," he said, "and you make a discovery and publish that discovery, it’s not yet the truth. He’s gotta do research, and get the same result as you. She’s gotta do the research and [the results] don’t have to be exactly the same, they have to be approximately the same. Then someone is going to invent a new apparatus that you haven’t dreamt of yet that’s going to test the same thing. If she gets the same answer, we have a new emergent truth. Then that goes into the textbook."

Prior to that, he said, the world of theory is a "bloody, messy place. Ideas come and go like the breeze. If there’s not yet a consensus of observation and experiment, there is no yet established truth in that field."

Nonetheless, Liversidge charged ahead and presented wild theory after wild theory. At one point, he said, "Black holes don’t make a lot of sense right now."

"The universe is under no obligation to make sense to you," deGrasse Tyson replied.

"It has a duty to make sense to you," said Liversidge.

DeGrasse Tyson responded, "It doesn’t give a rat’s ass how your five senses interact with this world."

After Liversidge said that he "just wants reassurance" that scientists know what they're talking about, deGrasse Tyson said, "No, it’s good! We have competent people thinking about this stuff. We’re not just making shit up."

He told Liversidge that he welcomes his "open skepticism," however.

"Many scientists don’t," the blogger said. "Biologists, for example. There’s horrendous misleading by the consensus that are obviously wrong. I’m referring to AIDS being caused by HIV. This was demonstrated to be clearly wrong 30 years ago. [The link has] been disproved in the literature and everyone ignores the literature."

DeGrasse Tyson challenged Liversidge to find anyone other than Peter Duesberg whose work says there is no link between HIV and AIDS.

"You’re going to find me a research paper that says HIV doesn’t cause AIDS?" he said. "One published paper is not the truth."

"Why not? It could be," said Liversidge.

"No, hold on," deGrasse Tyson said. "One paper is not what makes a scientific truth. It has to be verified by competing groups, people that design experiments differently. Only if all of these results point to the same direction can we then say this person made a discovery."