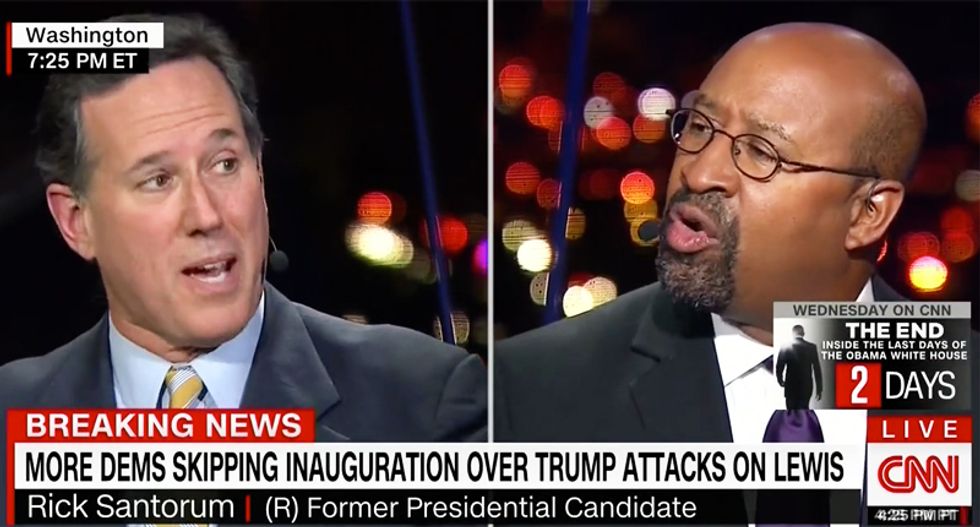 "The president of the United States is elected under a spirit of generosity and the spirit of the country in which we come together," Gergen explained. "This is the week to do that and when he responded in kind, against -- look, we have very few heroes in this country. John Lewis is one of them and it is not correct to say that Donald Trump was not insulting to him in his tweets. What about the 'all talk, no action, sad'?"

"This was an attack on his life, what he stands for, what he did for this country and marching across that bridge --" Gergen continued as Trump advocate Kayleigh McEnany jumped in to blurt, "It wasn't an attack!"

"He did. That is exactly what he did!" Gergen shot back.

Former Philadelphia Mayor Michael Nutter was then invited to defend Lewis and put his life into perspective.

"It's insulting to his life and legacy," Nutter lectured before turning to Trump. "When will the person who will be president act like a grownup and serious person, not always take the bait? Show some restraint, show some dignity. There is no bottom to the depth that he will go to argue with anyone, and cause disdain. Donald Trump was wrong. John Lewis is an icon. He can say whatever he wants."

"And in the context of his comments about legitimacy," Nutter continued. "I would almost liken it to -- you know in track and field there is something called a 'wind assist.' John Lewis said that Donald Trump was assisted by the Russian effort, which no one disputes. So that's all he was saying  and he has a right to say what he wants to say. He's a member of Congress. He's 70-some odd years old. He can say whatever he wants."

While former Pennsylvania Senator Rick Santorum said he would have handled the comments differently, he defended Trump by saying, "Donald Trump is the president because he did things like this."

That set Nutter off.

Watch the exchange -- and more involving Kayleigh McEnany -- below via CNN: