‘You want to hear me f*cking yelling?’: US-bound flight diverted after passenger goes on racist rant 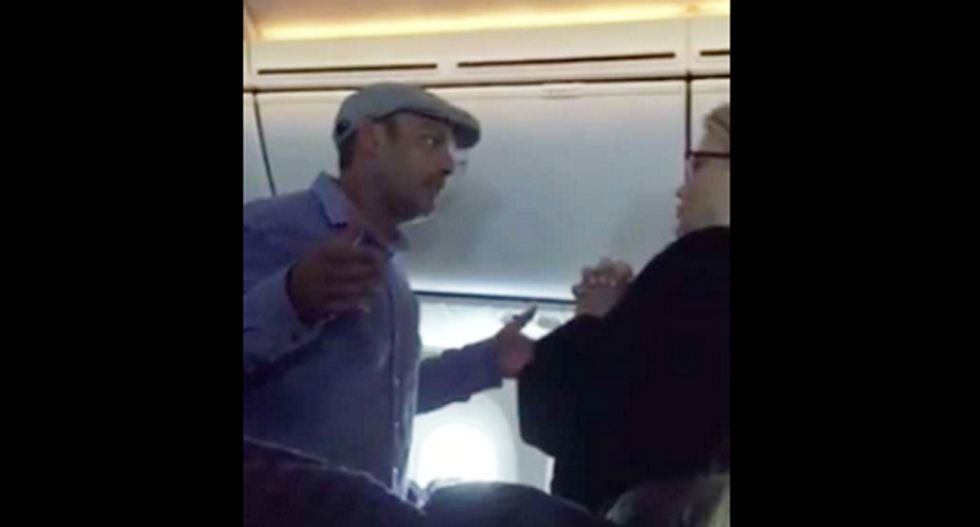 A man who went on a racist and gay-bashing rant on a United Airlines flight was arrested after he told a flight attendant that it would be "cool" if he caused the plane to be diverted.

According to the New Zealand Herald, the San Francisco-bound flight that originated in Sydney, Australia, was diverted to Auckland after the man reportedly became abusive with two other passengers, described as being of either Indian or Pakistani descent, who had been seated on either side of him.

In a video clip released to the Herald, the man can be seen talking with a flight attendant, telling her: "If you guys treat people right on these things, you see two last names the same don't put someone else in the middle of them."

Although the flight attendant can't be heard in the video, the unidentified man can be heard saying, "I'm perfectly calm. I'm not yelling, you want to hear me f*cking yelling?"

"Do you know how cool it would be to have the airplane turned around because of me? You are going to do that? You'd do that? I'm being so impolite aren't I?" he continued before exclaiming, "Fat ass,"as the attendant walked away.

According to one passenger seated three rows in front of the man, "The rant progressed from cursing Indians to Asians to Muslims to non-whites in general and calling flight crew f*ggots and fat asses. He was subdued after the pilot announced the diversion to Auckland."

"Passengers took cellphone video of his removal and he called them f*ggots as he passed them," he added.

According to New Zealand Immigration officials, the man was identified as an American national who was subsequently refused entry into New Zealand because he did not meet entry requirements, and that local police were holding him until they could place him on another plane to the U.S.

Watch video of the confrontation with the flight attendant below: