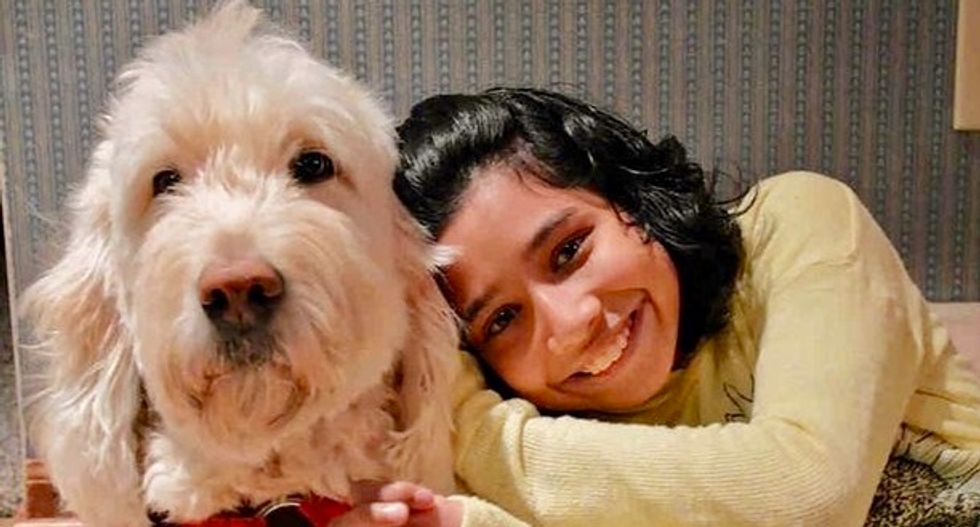 The U.S. Supreme Court on Wednesday sided with a disabled Michigan girl whose school refused to let her bring her service dog to class, making it easier for students like her to seek redress for discrimination in federal court.

The justices ruled 8-0 that Ehlena Fry, 13, and her parents may not be obligated to go through time-consuming administrative appeals with the local school board before suing for damages for the emotional distress she said she suffered by being denied the assistance of her dog, a goldendoodle named Wonder.

Ehlena was born with cerebral palsy, a neurological condition that severely limited her mobility. Wonder was trained to help her balance, retrieve dropped items, open and close doors, turn on lights, take off her coat and other tasks.

"I saw with my own eyes how Wonder helped my daughter grow more self-reliant and confident," Stacy Fry, Ehlena's mother, said in a statement. "We are thankful that the Supreme Court has clarified that schools cannot treat children with disabilities differently or stand in the way of their desired independence."

The justices sent the case back to a lower appeals court to determine whether Ehlena's complaint involves the impermissible denial of a proper special education.

The dispute arose in 2009 when Ehlena's elementary school in Napoleon, Michigan refused to allow her to attend school with Wonder. The school said she already had a one-on-one human aide, as part of her individualized special education program.

The family eventually moved to a different school district where Wonder was welcomed. They filed suit in 2012 in federal court, claiming discrimination under the federal Americans with Disabilities Act, which permits service dogs in public institutions.

The American Civil Liberties Union, which represented the family, said the ruling will remove unfair legal hurdles for victims of discrimination that prevent students from seeking justice guaranteed by the Americans with Disabilities Act.

Ehlena and her parents sued the school district seeking money damages for emotional harm, claiming the school deprived Ehlena of her independence, including in intimate settings such as the bathroom.

Wednesday's ruling overturned a 2015 decision by the 6th U.S. Circuit Court of Appeals in Cincinnati, Ohio upholding a dismissal of the lawsuit. The appeals court had said that under the Individuals with Disabilities Education Act (IDEA), a federal law governing special education, the family had to exhaust all of the administrative hearings in its service dog dispute with local and state officials before filing suit.

Writing for the court on Wednesday, Justice Elena Kagan said that if the substance of a lawsuit does not claim the denial of a proper special education under IDEA, then exhausting the administrative remedies is not required.