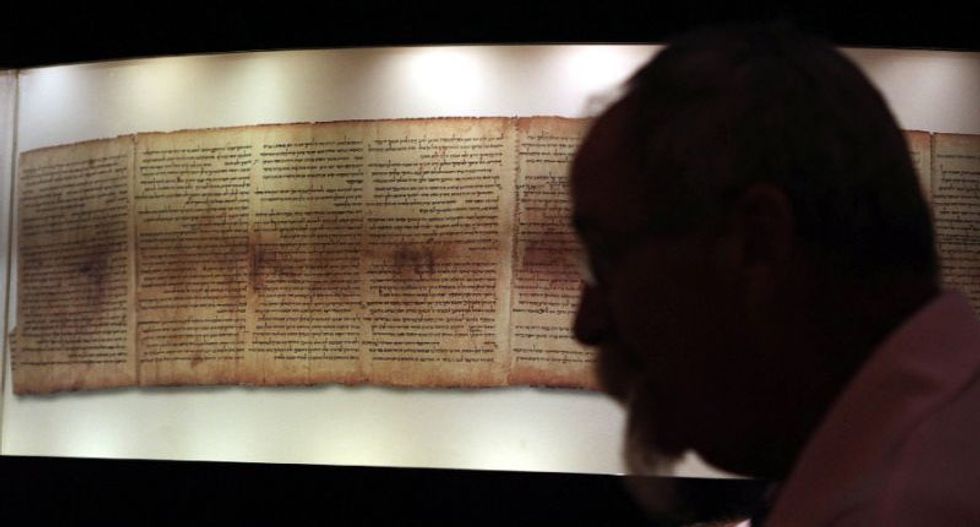 The Dead Sea Scrolls, which include the oldest known manuscripts of the Hebrew Bible, date from the 3rd century BC to the 1st century AD. (AFP Photo/GALI TIBBON)

Archaeologists have uncovered a new cave that once housed Dead Sea Scrolls, in a discovery described as one of the "most important" in 60 years.

The Hebrew University in Jerusalem said the scrolls were missing from the cave, though, but hopes to find others.

The Dead Sea Scrolls, which include the oldest known manuscripts of the Hebrew Bible, date from the 3rd century BC to the 1st century AD.

The around 900 scrolls were discovered between 1947 and 1956 in the Qumran caves above the Dead Sea.

"This discovery of a 12th cave could revolutionise the information we have on the Dead Sea Scrolls," Hebrew University archaeologist Oren Gutfeld told AFP, calling it one of the "most important" discoveries since 1956.

The parchment and papyrus scrolls contain Hebrew, Greek and Aramaic writing, and include several of the earliest-known texts from the Bible, including the oldest surviving copy of the Ten Commandments.

The cave discovered west of Qumran in the occupied West Bank contained no manuscripts, but there is ample evidence of their earlier presence.

This includes fragments of pottery in which they were placed and the leather straps, Gutfeld said.

Many of the caves containing the manuscripts were looted in the 1950s.

Heads of pickaxes dating from that time were found in the cave in another indication they had been looted, a Hebrew University statement said.

"We hope to find other caves containing or having contained manuscripts as part of the operation launched by the Antiquities Authority to carry out systematic excavations in the caves of the Judean Desert (where the Dead Sea is located)," Gutfeld added.

Many experts believe the manuscripts of the Dead Sea were written by the Essenes, a dissident Jewish sect that had retreated into the desert.

Other scholars believe they came from libraries of the Second Jewish Temple in Jerusalem and private libraries sheltered in caves.

The most recent scrolls date to around 70 AD, when Roman troops destroyed the temple.

The artefacts are mostly housed at the Israel Museum in Jerusalem, where some of the larger pieces are shown at the dimly lit Shrine of the Book.

The Shrine's white ceramic dome recalls the lid of the jars in which the manuscripts were uncovered.