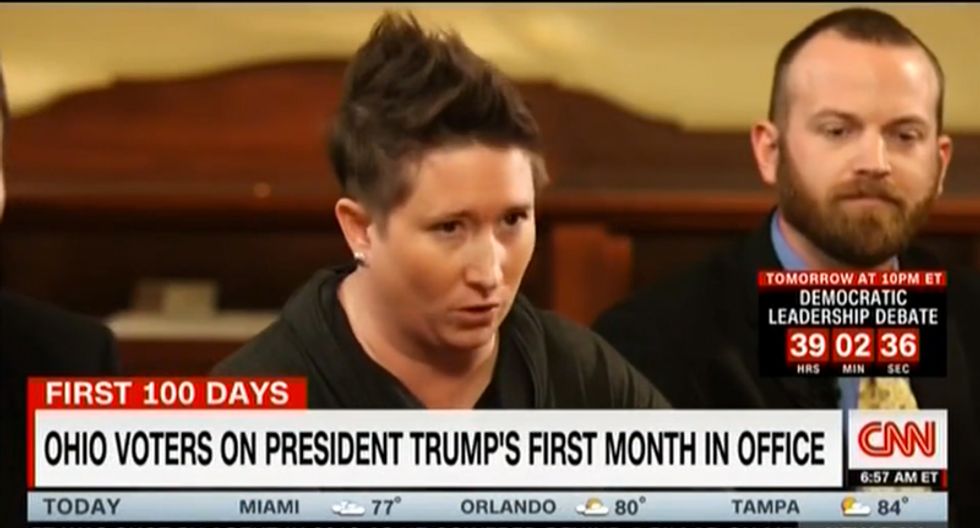 Christian Tamte, a resident of Columbus, Ohio, talks about the Trump administration on CNN (Screen cap).

A Christian woman participated in a CNN roundtable of voters to discuss President Donald Trump's first month in office, and she had some harsh words for Christian Trump supporters who back his immigration orders.

"I am heartbroken often," said Christian Tamte, a resident of Columbus, Ohio, when asked to assess her feelings on the first month of Trump's presidency. "This last month has been heartbreaking and as a Christian I'm offended often by what other people are calling Christian behavior which is -- I see it as farthest from that."

When asked for specifics, Tamte pointed to Trump's immigration travel ban order as a policy that showed a lack of Christian compassion.

Elsewhere in the segment, the Rev. Mary Rheiman similarly said that the policies being enacted by the administration were the opposite of what Christians should be supporting.

"If you go to the Gospels, you can look at the story of Jesus and the woman with the well," she said. "She was a Samaritan, and Jews and Samaritans hated each other. There was a social contract that they did not speak to each other. Jesus's message was, look, we are in this together, we are one. You can say you're Muslim, we are Christian, it doesn't matter."