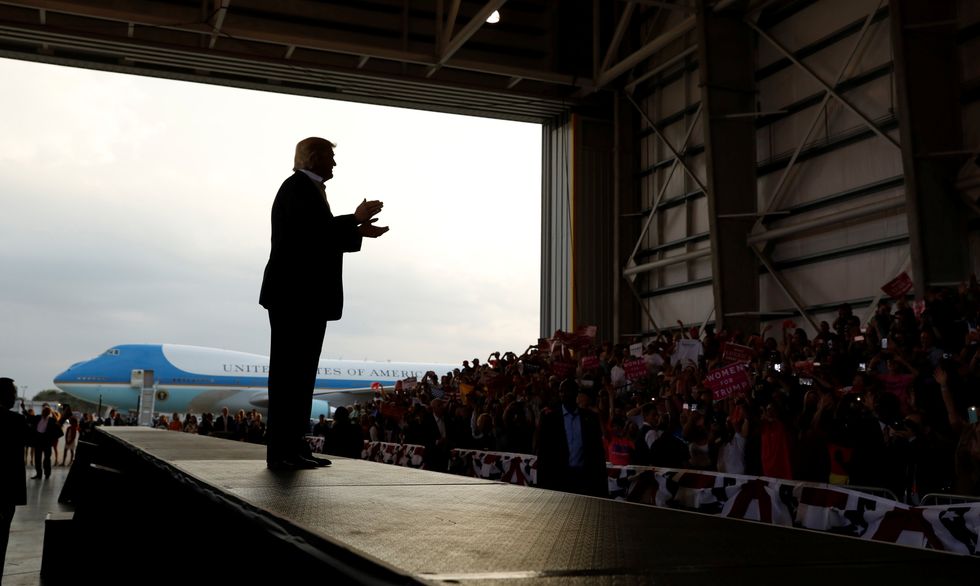 President Donald Trump, after a rocky first month in office, returned to the campaign trail on Saturday to deliver another attack on the media and tout his White House accomplishments in the friendly and familiar atmosphere of a rally with supporters.

Landing on Air Force One as the sun set near a hangar filled with thousands of people, Trump reveled in the crowd and listed promises he had kept, including starting the process of building a wall on the U.S. border with Mexico, deporting immigrants, and pulling the country out of a trade agreement with Asian nations.

"Life is a campaign. Making our country great again is a campaign," he told reporters on Air Force One when asked about criticism that he was starting to campaign so early.

The rally marks an especially early start to the 2020 election campaign. Trump filed re-election papers with the Federal Election Commission five hours after he was sworn in as president on Jan. 20.

The businessman-turned-politician told the crowd he wanted to speak to them without the filter of "fake news," his standard critique of the journalists and media organizations that cover him. The White House has been unhappy with stories portraying Trump's first weeks as chaotic.

His short tenure has been marked by turmoil over a contentious executive order limiting immigration from seven Muslim-majority countries and the resignation of his national security adviser.

The abrupt departure of Michael Flynn followed revelations that he had discussed U.S. sanctions on Russia with the Russian ambassador to the United States before Trump took office and misled Vice President Mike Pence about the conversations.

“I want him to know that we support him," said Carmela Rocheleau, 33, a registered nurse from Port St. Lucie, Florida, who attended Trump's rally.

"Everybody is going against him and I want him to know that we care about all the hard work that he’s doing because it seems like everybody attacks him for anything and nobody shows him any good credit," she said."

Gene Huber, 47, a car salesman from West Palm Beach, Florida, had been waiting in line to see Trump since 4 a.m. "His excitement and the love that he shows us, the people, that’s why each day brought me stronger and closer to him," Huber said.

In an unusual move, Trump allowed Huber to join him on stage and address the crowd during the rally. He acknowledged later that the move probably did not please the Secret Service.

At one point, Trump also read aloud the federal statute at issue in the litigation challenging his immigration executive order, while again criticizing the appellate panel that blocked its enforcement.

He pledged a revised order would come in a matter of days. "We don't give up," Trump said. "We never give up."

Trump also heavily criticized Senate Democrats for holding up confirmation of his cabinet nominees. "They're doing the wrong thing for the American people," he said.

He decried public-opinion polls that show him with a high disapproval rating as "phony" and urged his supporters to pay no attention to them. But after a speech filled with attacks on the media and his opponents, the president tried to close on a unifying note.

"Let us move past the differences of party and find a new loyalty rooted deeply in our country," Trump told the crowd.