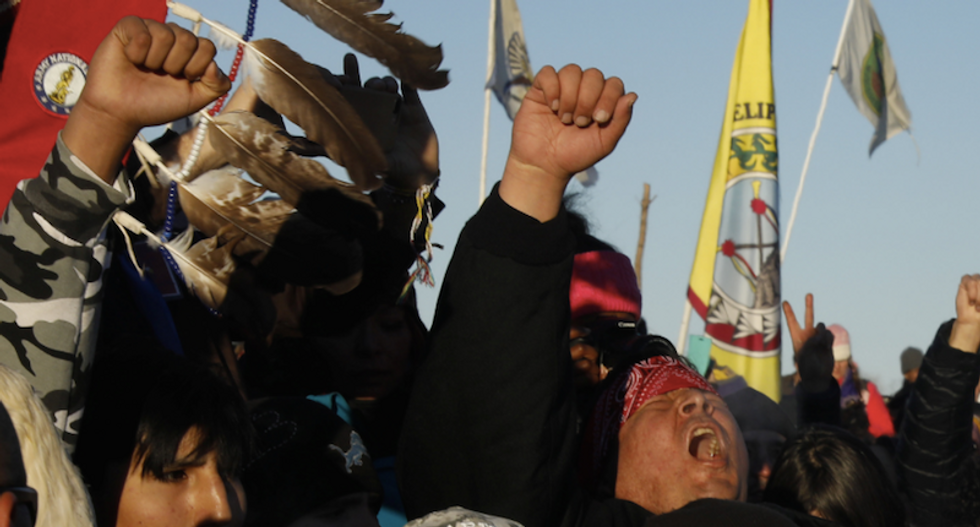 Native American "water protectors" celebrate that the Army Corps of Engineers has denied an easement for the $3.8 billion Dakota Access Pipeline inside of the Oceti Sakowin camp as demonstrations continue against plans to pass the Dakota Access pipeline adjacent to the Standing Rock Indian Reservation, near Cannon Ball, North Dakota, U.S., December 4, 2016. (REUTERS/Lucas Jackson)

The chief executive of Phillips 66 said on Friday he expects the Dakota Access Pipeline to start operations in the second quarter, even though the project - which has sparked protests by Native Americans and environmentalists - is still in the midst of legal battles and a U.S. regulatory review.

Phillips 66 has a 25 percent stake in the $3.8 billion project led by Energy Transfer Partners LP. Phillips 66's CEO, Greg Garland, made the comments on a conference call with analysts to discuss quarterly earnings.

The pipeline was originally set to start in late 2016 but has faced intense protests and legal challenges from climate activists and Native Americans, led by the Standing Rock Sioux Tribe, whose land in North Dakota runs adjacent to the route..

"Commercial operations are expected to begin in the second quarter of 2017, pending the issuance of an easement from the U.S. Army Corps of Engineers to complete work beneath the Missouri River on DAPL," Phillips 66 said in its earnings news release.

On Wednesday, the U.S. Army said it had taken initial steps to "expeditiously review requests for approvals to construct and operate" the pipeline per an order issued by President Donald Trump, but the project's easement has not yet been approved.

It is unclear whether the second-quarter timeline would be met unless the easement is granted soon. The comment period ends on Feb. 20, and even if the easement were granted immediately after, ETP has estimated a 90-to-120-day drilling period.

Late on Wednesday, three Democratic U.S. senators sent a letter to the Trump administration objecting to its move to expedite the review process, saying it undermined federal law and treaty responsibility to Native tribes.

The U.S. Army Corps of Engineers has given protesters until Feb. 22 to leave the campsite, which they have occupied for months, ABC News reported on Friday.

The Army said that the campsite, which is on federal property, may flood in the coming weeks making it dangerous for protesters, according to ABC News.

The pipeline is expected to carry some 470,000 barrels per day of crude oil from North Dakota's Bakken shale play into Illinois, and is more than 95 percent complete, according to a Phillips 66 filing on Friday.