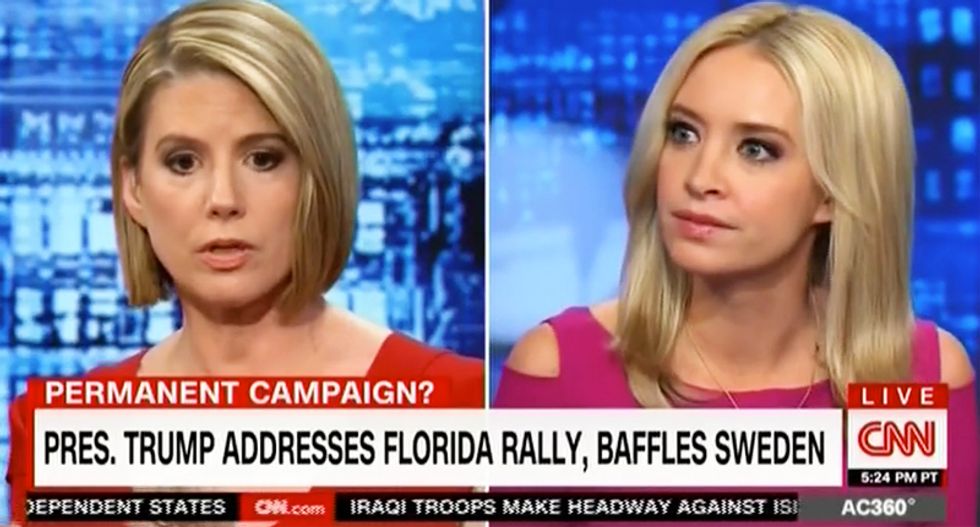 Trump advocate Kayleigh McEnany attempted to use a rise in reported crimes in Sweden to explain away the president's bizarre Saturday comments about attacks by immigrants in the country, only to have it pointed out that the increase is actually in cybercrime.

Appearing on AC360 with Anderson Cooper, McEnany doubled down on her remarks that Fox News viewers knew what the President was talking about when he mentioned Sweden during a Saturday rally in Florida.

"I was at the rally," McEnany explained, adding, "And when I heard that statement, I asked the person next to me, what do you think he's talking about. He said 'Oh, he's referring to something he saw the previous night,' and the person actually heard it exactly as Trump then clarified and tweeted it, meaning that he saw this segment on Fox news and relayed this information."

Turning to crime in Sweden, McEnany remarked, "I would dispute the notion that there isn't anything going on in Sweden at all. In fact, crime has gone up. Just two hours ago on Wolf's show they put up a graphic showing 7 percent increase in reported crime."

Host Cooper pulled McEnany up short, telling her, "I might be wrong about this but I think our correspondent who is actually there was saying a lot of that has to do with cybercrimes or other forms of crime."

McEnany then attempted to make her case using anecdotal evidence by saying, "You talk to residents on the ground ..." only to have co-panelist and commentator Jonathan Tasini shoot her down.

Referring to Trump's assertion, Tasini lectured McEnany, "He's not right and shouldn't be taking information from Fox News. He should maybe be consulting with his intelligence briefings which might have the facts."