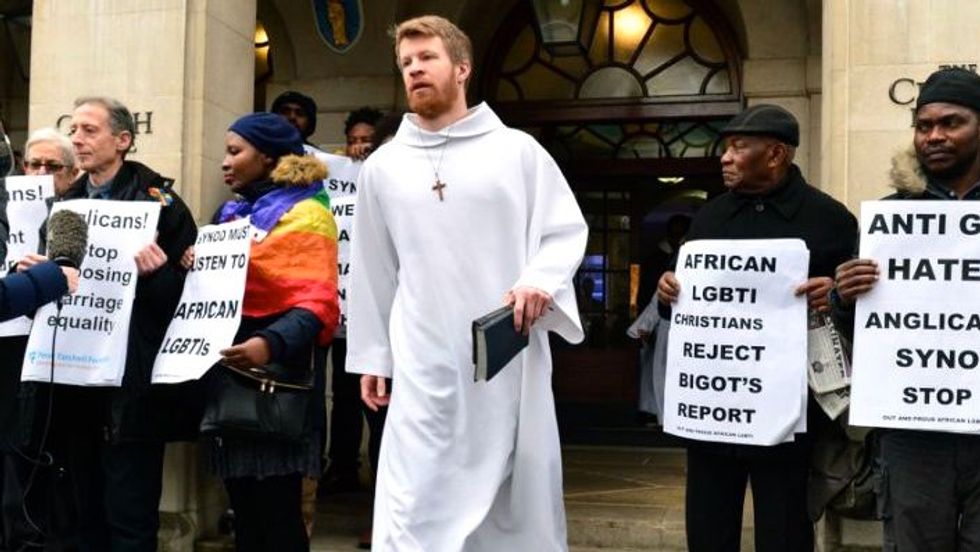 The Church of England's General Synod on Wednesday rejected a report which ruled out accepting homosexual marriage and had led to a gay rights protest outside the meeting of Anglican bishops.

The "Marriage and Same Sex Relationships after the Shared Conversations" report, released on January 27, had called for the traditional teaching that marriage is a lifelong union between a man and a woman to be upheld.

The report also reaffirmed the view that the clergy must remain celibate if in a same-sex relationship and that they should not be allowed to bless same-sex marriages.

But it did recommend "a fresh tone and culture of welcome and support" for the LGBT community.

Participants in the Synod, the Church of England's legislative body, agreed overall to "take note" of the report, by 242 votes to 184.

But it was rejected under Synod rules because it failed to win a simple majority among clergy, despite being backed by bishops and laity.

After the vote, the Bishop of Willesden, Pete Broadbent, said he hoped the Church of England would continue debating the topic.

"The Synod has declined to take note and so the report in its present form cannot come back to Synod for discussion, though we will still have to find a way forward for the wider discussion," he said.

Ahead of the vote 50 protesters, carrying placards reading "LGBT equality for people and priests" and "Synod should reject bigot's report," called on bishops not to acknowledge the report, saying the concessions offered were not enough.

"A change in tone is such a superficial proposal," Colin Coward, a minister and director of Changing Attitude, told AFP during the protest.

"Christ talked about a God of infinite, unconditional love. I don't think the Church -- this is a shocking thing to say -- really understands what that is," he said.

Tracey Byrne, chief executive of the One Body One Faith charity, said: "I think what we're looking for is not equal marriage at this stage, but just some really clear sign that the Church is going to bless and recognise our relationships in a formal way."

Fourteen retired bishops have also criticised the report, penning a letter this week saying the call for a change of tone "does not carry conviction."

"Our perception is that while the pain of LGBT people is spoken about in your report, we do not hear its authentic voice," the letter said.

The report rejected on Wednesday has been seen as far more conservative than a previous set of proposals in 2013 that had argued that clergy should be allowed to bless same-sex marriages and welcomed the presence and ministry of LGBT people both lay and ordained.

The Anglican church last year suspended the Episcopal Church, its US branch, for three years after it approved ceremonies for same-sex marriages.

Declining church attendance in more liberal countries has put pressure on Anglican leaders to be more accommodating on issues such as same-sex marriage, but that has put them at loggerheads with conservatives.

Homosexuality is either illegal or strongly taboo in several countries with large Anglican congregations.

In 2014, Justin Welby, the Archbishop of Canterbury and principal leader of the Church of England, said it would be "catastrophic" if the mother church of the Anglican Communion accepted gay marriage.

Welby argued that the association could lead to the slaughter of Christians in countries such as Pakistan, South Sudan and Nigeria.