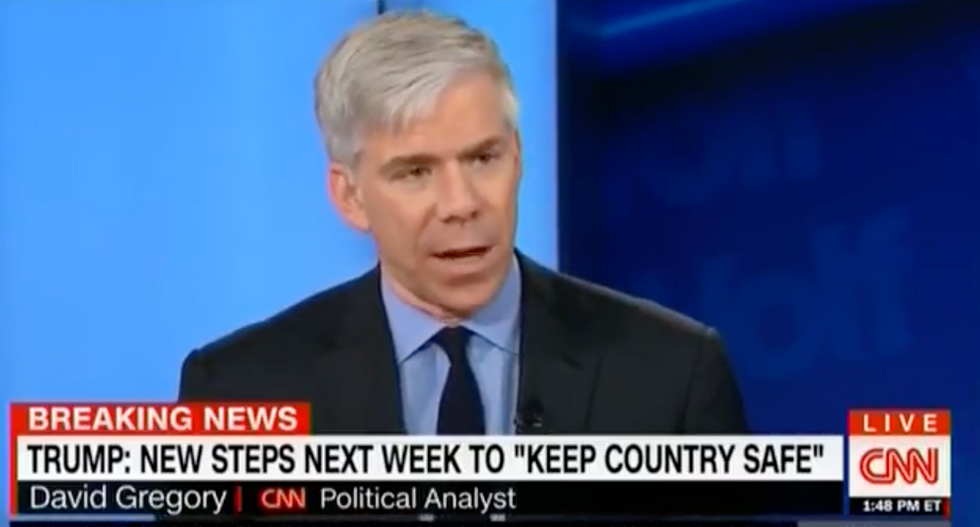 A CNN panel on Friday got to the root of Donald Trump’s most controversial executive order, with journalist David Gregory arguing the president’s travel ban “is just fear.”

During a press conference with Japanese Prime Minister Shinzō Abe at the White House, Trump told reporters that he, as president, is aware of threats most people have no knowledge of. "We will be doing things to make our country safe,” Trump promised. “It will happen rapidly "

Discussing Trump’s statement, CNN political analyst Gloria Borger related the president’s remarks to how he ran his campaign. “The campaign strategy was, you want to get people to your point of view, you stir the pot, you stoke the fear,” Borger said.

“Presidents don’t usually stoke fear,” she added. “What they usually do is try and comfort people.”

“If he’s worried about the public opinion about his policy, what he’s going to do—and what he’s doing—is saying to people, ‘You need to believe me, I know more than you do, you should be very afraid.’”

Former prosecutor Laura Coates pointed out while “fear” is “good enough for a campaign strategy, it’s not good enough for the courts,” noting the Ninth Circuit Court of Appeals’ decision yesterday to reject the government’s request to reinstate the travel ban.

“You can’t just do the school yard, ‘I know something you don’t know, trust me,’” Coates said, adding “a bald assertion of national security is not going to be carte blanche to violate the Constitution.”

Gregory argued that the court’s decision was a total “rebuke of the travel ban,” insisting while the president may ultimately be proven “right on the law,” he’s in fact stoking fear in order to generate support for his immigration order.

“[Trump] campaigned on the idea that there’s all these bad people overseas and they’re coming to get us,” Gregory said. “He doesn’t have specific evidence on that, but he’s making an argument—as are his advisers—that the U.S. is vulnerable like Europe is vulnerable.”

Gregory said Trump’s fear-mongering “ignores the fact that we have much better safeguards” than Europe, including strict vetting for refugees—something the president explicitly ignores.

“This is just fear,” Gregory argued. “It’s the stoking of fear, without any real evidence. And we saw more of it today.”