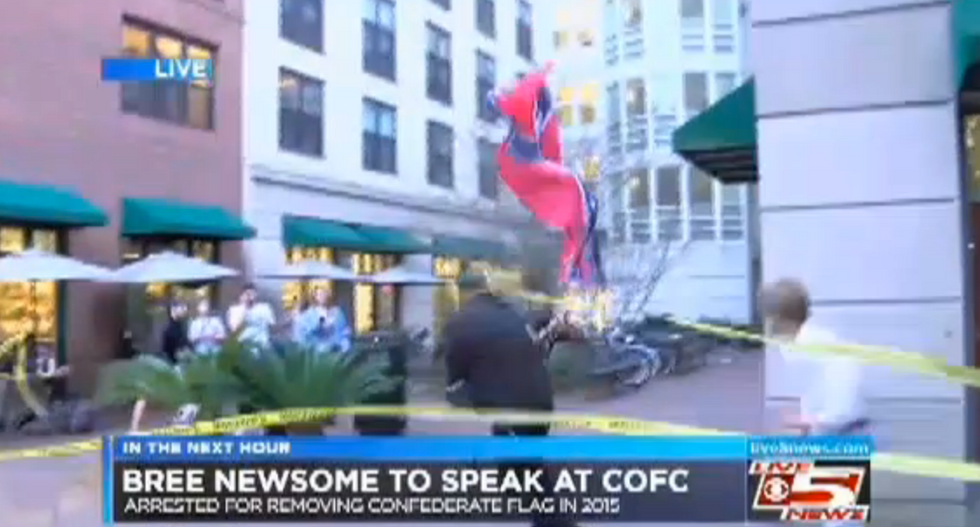 Activist Bree Newsome, who famously scaled the South Carolina Capitol flagpole in 2015 to remove its Confederate flag, spoke at the College of Charleston on Wednesday night. Her guest lecture was titled, "Tearing Hatred from the Sky."

In the days leading up to the event, people showed up to protest Newsome's visit, and were met with many counter-protestors from groups such as Southerners on New Ground, Indivisible Charleston and Showing Up for Racial Justice (SURJ). SONG organizer Skyelynn Landry told the Post and Courier, "We see all this white nationalism and racist rhetoric coming out of the woodwork, but it’s been there a long time."

Ahead of Newsome's lecture on Wednesday, one man stood near the event holding a Confederate flag, which didn't last long. Charleston Black Lives Matter organizer Muhiyidin d’Baha ran at the man to grab his Confederate flag and let it be known it would not be welcomed. The moment was perfectly caught on camera during a live newscast.

D'Baha was arrested and charged with disorderly conduct, according to a Charleston Police Department spokesman. SURJ has already organized an online fund to raise money for bail.

D'Baha's action comes in the midst of ongoing discussion among liberals and antifascist protesters about whether or not to allow a platform for hate speech.

See below for video: