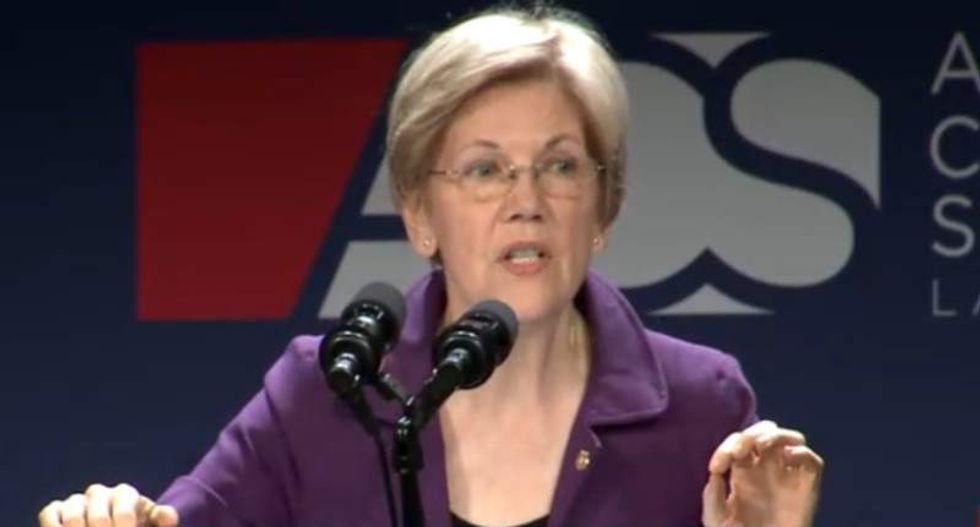 Mitch McConnell may have cut her off on the Senate floor, but Elizabeth Warren refuses to be silenced. Two days after becoming an internet meme, the Massachusetts senator sat down with Attn to discuss an underreported but no less pressing Trump scandal.

"What Donald Trump wants to do is fire one of the most important financial cops and then say to the American people, you keep walking down this dark alley and, you know, what happens is what happens," Warren revealed.

"The Consumer Financial Protection Bureau, which didn't even exist before the financial crisis [prevents Americans from being] cheated on mortgages and credit cards and] the things that ultimately blew up our economy," Warren explained.

The CFPD was created by the Dodd-Frank financial reform act and specifically helped combat home mortgage scams. Now that Trump wants to scrap the legislation, Republicans such as Rep. Hensarling along with Sen. Mike Lee of Utah and Sen. Ben Sasse of Nebraska say Cordray must go.

"The financial services industry, the giant banks figured out, Whoa, there's money to be made here... by selling, lyin' and cheatin' scammin' mortgages, and that's what they did," Warren said.

"They sold them in big numbers and for a little while it was feeling a sugar high," she continued. "Housing prices went up, the economy went crazy, and then, of course, it all blew up. They not only cost people their homes and cost them their financial security, they cost millions of people across this country their jobs and their savings. They really created the economy that makes it so hard for young people to come in and get good and decent jobs and be able to move ahead."

Warren became the Special Advisor to the Secretary of the Treasury for the Consumer Financial Protection Bureau in September 2010, but was not nominated to direct the agency for fear she would not pass confirmation. President Obama nominated Cordray instead 10 months later.

According to Warren, the agency functions as "a cop on the beat, to [provide] a level playing field" and "Donald Trump just started the process to try to gut the rules."