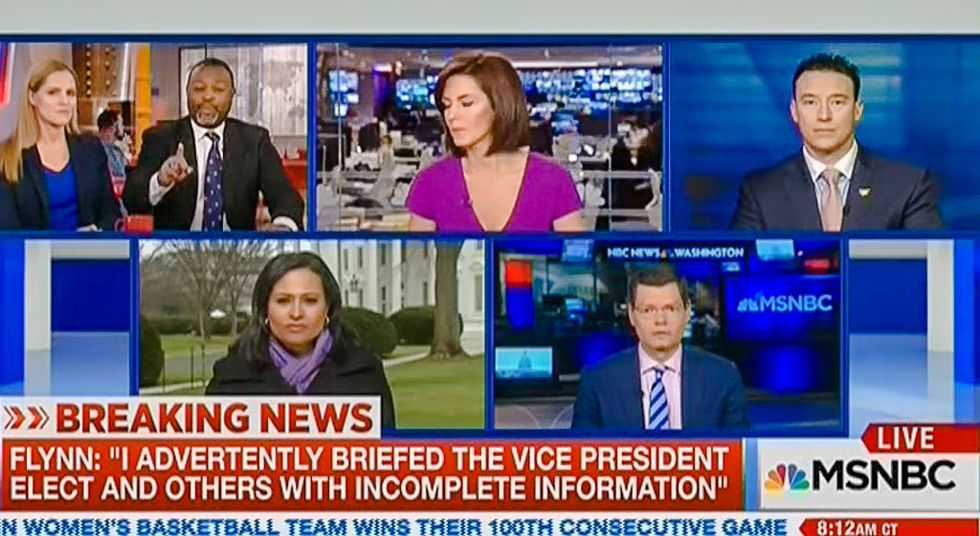 Carl Higbie, a former Navy SEAL who is reportedly in the running to be the next White House press secretary, asserted on Tuesday that career government employees had a duty not to leak information damaging to Trump -- even if they witness violations of the U.S. Constitution.

"More importantly, why is our own government leaking stuff to the press that is patently -- they shouldn't," he insisted to MSNBC host Stephanie Ruhle.

"Carl," Ruhle interrupted. "Maybe our own government is leaking because of all this confusion, because possibly [former acting Attorney General] Sally Yates warned the White House counsel a month ago about the risk of blackmail, possibly because you have someone like Kellyanne Conway speak of alternative truths, Sean Spicer is potentially put in a situation where he's like a human shield speaking before the press. And the story keeps having to change."

"You are a Navy SEAL yourself," the MSNBC host noted. "Could you see that maybe there are some people in there who are patriots who are saying, 'I've got to figure a way to get the truth out.'"

"Or people with crosshairs on Mike Flynn, you never know," Higbie quipped. "We have enormous leaks coming out of this White House on both sides right now. And I think this is indicative of a clear division of politicos, Obama leftovers. We call them the we-bes. We be here when you come, we be here when you go."

"And then also, you have the loyalists, the people that are here to back Donald Trump's policies, back his agenda," he continued. "And that's the thing. Donald Trump needs to find out right now, who is loyal and who's a politico and who needs to go."

"Loyal to whom?" Ruhle wondered.

"Loyal to Donald Trump and his agenda," Higbie insisted.

"This is not about people trying to undermine the Trump administration," Nance explained. "These are people where we have a serious counterintelligence problem going on. There are FISA warrants out circulating behind this. We have a national security adviser who may have been cutting deals on Russian spies."