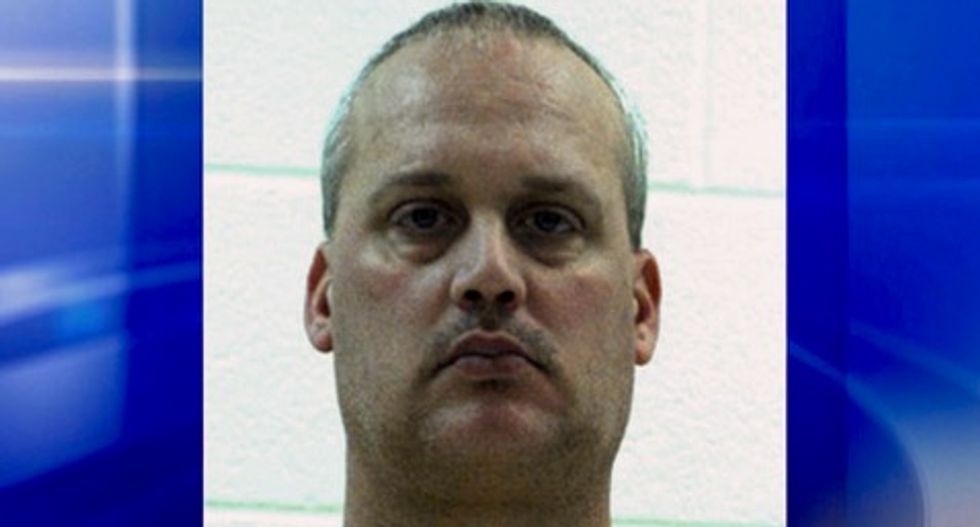 Pennsylvania State Police arrested Jeffrey Sandusky on Monday on charges that he solicited oral sex and naked photographs from the teenage daughters of a woman he was dating, police said. They had all lived in the same home for about five years, according to police.

He faces 14 counts of statutory sexual assault and sexual abuse of a minor and other crimes, according to the criminal complaint filed in court in Bellefonte, a town near Pennsylvania State University's main campus.

His father was convicted in June 2012 on 45 counts of sexually abusing boys over a number of years and sentenced to between 30 and 60 years in prison in a closely watched case that sullied Pennsylvania State University's reputation and rocked the world of college football.

Jerry Sandusky, 73, was a former assistant football coach at long-time college football power Penn State, and some of his abuse took place on the campus, plunging the school into scandal after the abuse became widely known. He is appealing the conviction.

Matt Sandusky, another adopted son of the former coach, has accused Jerry Sandusky of sexually abusing him when he was a foster child before he was adopted.

Jeffrey Sandusky, who had defended his father as innocent in a 2015 interview, appeared in court on Monday and bail was set at $200,000, according to court filings. His lawyer Lance Marshall declined to comment, and court records indicated that Sandusky had not posted bail and remained in custody.

The Pennsylvania Department of Corrections said Sandusky had been suspended from his job at a prison in Rockview.

One of the girls said she was 16 when Sandusky asked for pictures of her breasts, telling her "it's not weird because he studied medicine," according to a police summary of the exchanges.

He continued to pester her via text messages for pictures over two days. She refused.

"You literally tried to guilt me into doing it," the girl wrote to him at the end of the exchange, according to police. "You know who does that? Rapists and Abusers, not stepdads who care about their stepdaughters. I don't know how many times I need to tell you no and to stop before you get it."

The girl told her older sister, who in turn said that Sandusky had pestered her for oral sex a few years earlier, when she was 15, police said.

The younger girl later showed Sandusky's texts to her father who called the police. She and her sister informed her mother that evening, who confronted Sandusky.

The mother and daughters told police that Sandusky explained that he needed the pictures to help him remove other naked pictures of the younger daughter from the internet. The family said there were no such pictures online and dismissed this reasoning as a lie before the mother told him to move out, police said.

(Reporting by Jonathan Allen in New York; Editing by Will Dunham and Lisa Shumaker)