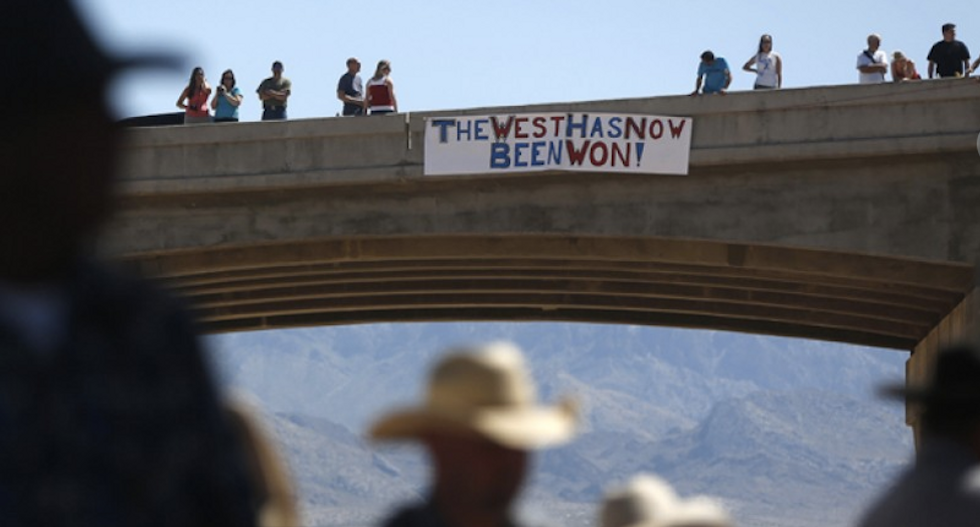 Protesters place a sign on a bridge near the Bureau of Land Management 's base camp where seized cattle, that belonged to rancher Cliven Bundy, are being held at near Bunkerville, Nevada April 12, 2014. U.S. officials ended a stand-off with hundreds of armed protesters in the Nevada desert on Saturday, calling off the government's roundup of cattle it said were illegally grazing on federal land and giving about 300 animals back to rancher Bundy who owned them. REUTERS/Jim Urquhart (UNITED STATES - Tags: POLITICS ANIMALS BUSINESS CRIME LAW CIVIL UNREST)

Opening statements were to begin on Thursday in the first of three trials over an armed standoff in 2014 at the rural Nevada property of Cliven Bundy, a rancher who has achieved celebrity status in the West in his opposition to government land policy.

Bundy’s decades-long fight with the U.S. government over unpaid grazing fees came to a head in March 2014 when Bureau of Land Management officials attempted to enforce a court-ordered roundup of hundreds of his cattle on a desert range 75 miles northeast of Las Vegas.

The move drew hundreds of supporters to the family’s Bunkerville ranch. The six men going on trial have been described by prosecutors as Bundy's "gunmen and followers."

By April 12, the six had arrived from Arizona, Idaho and Montana “armed with assault rifles and other firearms,” the indictment said. They are accused of a conspiracy to recover Bundy's cattle “by force, threats and intimidation.”

All six have pleaded not guilty to conspiracy, weapons, assault and other charges. Although Gregory Burleson, O. Scott Drexler, Todd Engel, Richard Lovelien, Eric Parker, and Scott Stewart are considered by the court to be the lowest level of the 17 defendants in the three separate trials, prosecutors hope to benefit from a series of photographs, some published widely, of at least one of them pointing a rifle at federal officers.

In the second trial, Bundy and two of his sons are being tried with other defendants considered leaders of the standoff.

No shots were fired in the standoff. During jury selection defense lawyers raised Second Amendment rights and prospective jurors’ opinions on gun ownership.

Beyond the criminal charges, which include attempting to stop government agents at gunpoint, the trial represents a clash of legal and political philosophies over the management and use of public lands in the West.

The federal government controls 85 percent of the land in Nevada, most of any state. While prosecutors have requested that the judge focus the trial on the standoff, the defense is seeking to broaden it to include contested federal land management.

Officials have increased security at the courthouse, which already features a metal detector and checkpoint. More than a dozen uniformed federal and local police officers were on patrol while pro-Bundy supporters with signs and flags assembled on the sidewalk.