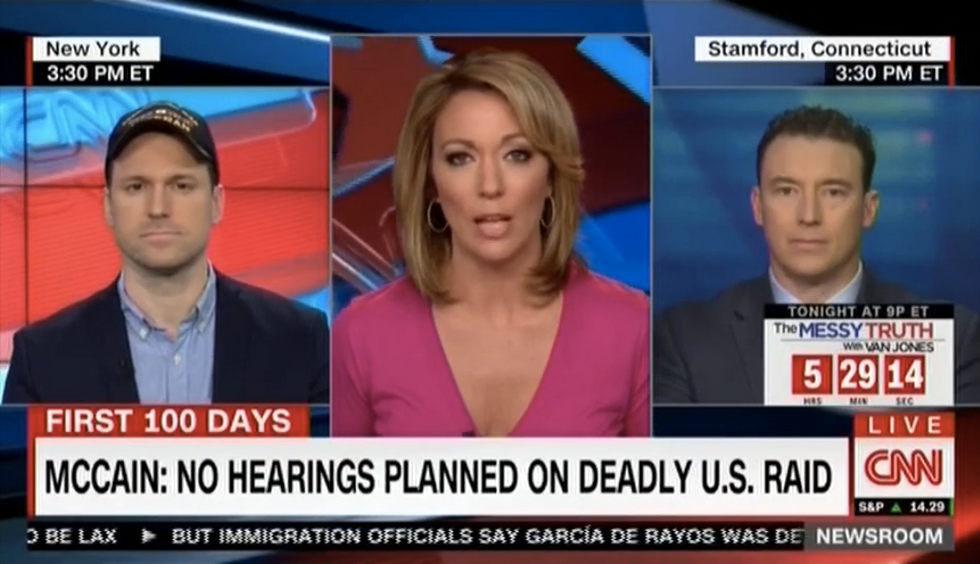 CNN's Brooke Baldwin asked O'Brien whether anyone should be commenting on whether a raid like the one in Yemen that killed a U.S. Navy SEAL was successful or not successful.

Higbie said that he didn't think Sen. McCain -- who has recently ratcheted up his criticism of Pres. Trump -- would object to a commando raid on the Vietnamese prison camp where he was held prisoner and tortured for six years, even if "somebody died on the way in -- if they successfully rescued him."

"Just because somebody died -- and my respect to Ryan, it's a tragic loss for the SEAL community -- that said," Higbie continued, "we sign up for this, we understand that these are the risks and we can have a successful mission if we have a loss of life, unfortunately."

Higbie replied that if the mission succeeded in its goal, if actionable intelligence was gathered, he would have been willing as a SEAL to give up his life.

When O'Brien said that McCain does not owe an apology for criticizing the mission, Higbie went on the attack raising the fact that O'Brien was a conscientious objector to the war in Iraq, "which is fine, but to leave your friends and family and brothers and sisters stranded on the battlefield because you were a conscientious objector and then come back and slander people like Donald Trump to say that he's supported by white supremacists or to say that Ryan's family is not owed an apology by a senator who straight-up said that mission was a failure? I mean, come on. That's ridiculous and it's dishonorable."

"I don't think there's anything dishonorable about taking a stand for one's moral values," O'Brien responded. "And as for your style of consistently going after my service record, I have treated many special operations soldiers, many of whom did not survive...I think it would be better if we kept this conversation on policy rather than attacks on each other's service."

"I absolutely have a problem with you using your conscientious objector status to get out of the military," Higbie said, "so, yeah, it absolutely draws into question your credibility to comment on an issue like this because you tucked tail and ran when others stayed and fought."

"So, I think John McCain does owe an apology to the Owen family and I think it was dishonorable of him, too, to say, I mean, like, look: This mission was a complete success if we got the objectives we wanted. He called it an unsuccessful mission because of a plane crash? This was a guy who crashed an enormous amount of planes during training. These things happen and it's not an unsuccessful mission simply because John McCain doesn't like Trump."

McCain's daughter Meghan McCain tweeted that she was amazed at Higbie's rudeness and arrogance.

It is BIZARRE to watch a navy seal @CarlHigbie to say my father's service was dishonorable. BIZARRE. I am on Earth freaking 2.
— Meghan McCain (@Meghan McCain)1486672596.0