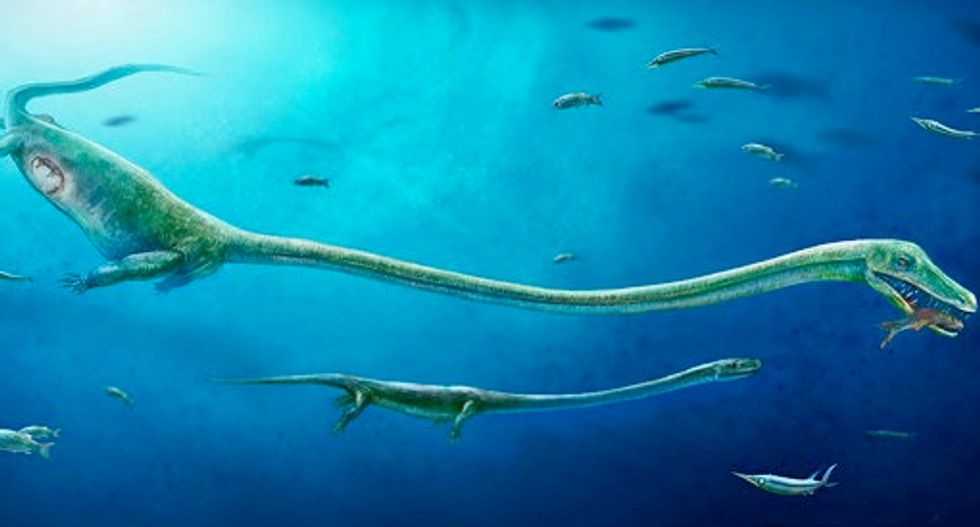 A fish-eating reptile called Dinocephalosaurus, which lived about 245 million years ago during the Triassic Period, is pictured in this artist's reconstruction handout image showing the rough position of the embryo within the mother. Dinghua Yang/Handout via REUTERS

An extraordinary fossil unearthed in southwestern China shows a pregnant long-necked marine reptile that lived millions of years before the dinosaurs with its developing embryo, indicating this creature gave birth to live babies rather than laying eggs.

Scientists on Tuesday said the fossil of the unusual fish-eating reptile called Dinocephalosaurus, which lived about 245 million years ago during the Triassic Period, changes the understanding of the evolution of vertebrate reproductive systems.

Mammals and some reptiles including certain snakes and lizards are viviparous, meaning they give birth to live young.

Dinocephalosaurus is the first member of a broad vertebrate group called archosauromorphs that includes birds, crocodilians, dinosaurs and extinct flying reptiles known as pterosaurs known to give birth this way, paleontologist Jun Liu of China's Hefei University of Technology said.

It boasted one of the longest necks relative to body size of any animal that ever existed. Dinocephalosaurus, unearthed in Yunnan Province, was an estimated 13 feet (4 meters) long, including a slender neck roughly 5-1/2 feet (1.7 meters) long, Liu said. It had paddle-like flippers, a small head and a mouth with teeth, including large canines, perfect for snaring fish.

"I think you'd be amazed to see it, with its tiny head and long snaky neck," said University of Bristol paleontologist Mike Benton, who also participated in the research published in the journal Nature Communications.

Its body plan was similar to plesiosaurs, long-necked marine reptiles akin to Scotland's mythical Loch Ness Monster that thrived later during the dinosaur age, though they were not closely related.

Not laying eggs provided advantages to Dinocephalosaurus, the researchers said. It indicated the creature was fully marine, not having to leave the ocean to lay eggs on land like sea turtles, exposing the eggs or hatchlings to land predators.

Many animal fossils have been found with the stomach contents intact, for example whole fish. Several factors showed this embryo was the female Dinocephalosaurus' baby, not its breakfast.

Liu said it was found in a curled posture typical for vertebrate embryos. The embryo faces forward relative to the mother, while swallowed animals generally face backward because a predator will gulp prey head-first to help it get down the throat.

Montana State University evolutionary biologist Chris Organ said while some reptiles such as crocodiles determine the sex of their babies through the temperature inside the nest, Dinocephalosaurus determined its offspring's sex genetically as mammals and birds do.