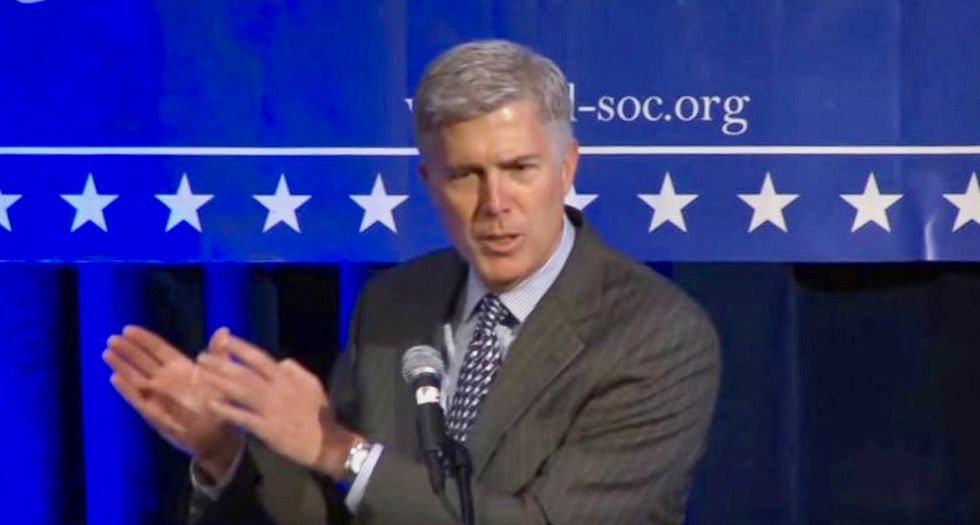 President Donald Trump's nominee to the Supreme Court Neil Gorsuch claimed that he volunteered for the Harvard Prison Legal Assistance Project and the Harvard Defenders, but fellow students don't remember it that way.

During Trump's nomination speech, he explained that Gorsuch had “demonstrated a commitment to helping the less fortunate," but the Wall Street Journal reported “roughly three dozen students who participated in the two programs while Mr. Gorsuch was at Harvard Law School from 1988 to 1991 said they have no recollection of his involvement.”

There were two people who oversaw students doing the work for these organizations during this period. Both said they had no memory of Judge Gorsuch’s involvement. Another declined to answer when asked and classmates and friends admit that they have no recollection of him even discussing the program.

The White House did provide the Wall Street Journal with the name of one Harvard Law School graduate who said would corroborate the involvement, however. New York County prosecutor Chris Edel said he attended a few weeks of a training that the Defenders program did along with Gorsuch in either 1990 or 1991. The two lived together while in school and were members of a social club called the Lincoln's Inn Society.

“What I am prepared to do is corroborate that Neil Gorsuch was in the Harvard Defenders,” Edel told WSJ. “I have a specific recollection of talking to him about one case, but I don’t want to go into the details…I’d like to leave it there.”

Edel also mentioned another classmate, David E. Nahmias, but when contacted he couldn't confirm that Gorsuch was involved either.

A 2006 Senate questionnaire for judicial appointees revealed Gorsuch answered an inquiry about "serving the disadvantaged" with a claim he did pro bono work beginning in law school. He claimed he helped Massachusetts inmates “with respect to, among other things, hearings on disciplinary actions taken against them” and represented “defendants in criminal proceedings in Massachusetts state courts.”

The questionnaire then asked for specific instances of the amount of time devoted to each," but Gorsuch did not answer.

Gorsuch was included on a 2008 email sent to 124 alumni of the program seeking volunteers to mentor Harvard law students, according to former alumni director Alicia Reed. She couldn't confirm if Gorsuch was ever officially a member of the cause, however.

The two programs reportedly offer law school students an opportunity to engage in "real-life" experience in representing the poor and those already incarcerated. Including the volunteer information was said to be a "personal touch" on his deeply conservative resume. The background information was included in the 2006 biography President George W. Bush posted after the Judge's confirmation to the federal appeals court.