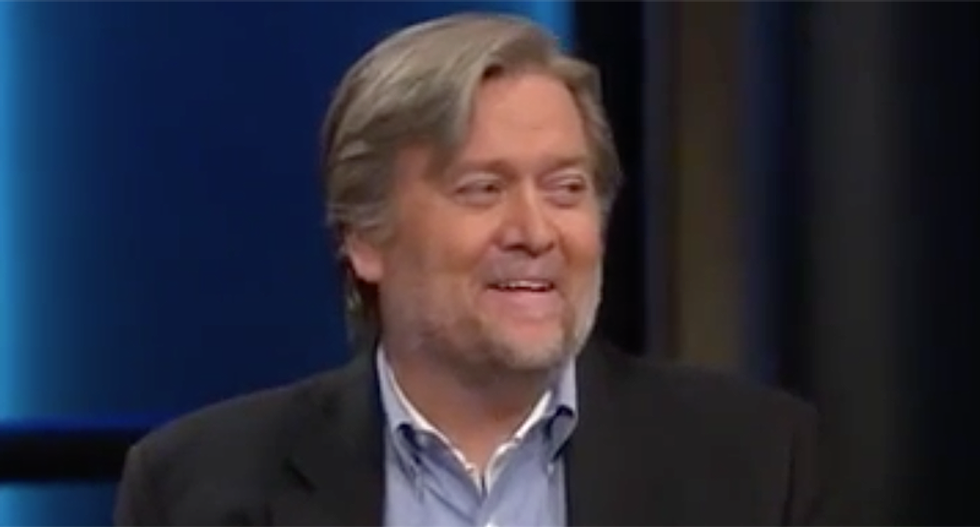 Bannon came into the White House as a controversial figure with a reputation for working with far-right groups to attack Democrats as well as establishment Republicans. He's been accused of being racist, xenophobic and misogynist and charged with leading an anti-Semitic and nationalist agenda. Trump and his team have all denied these accusations about Bannon, however.

According to a Newsweek report, Steve Bannon was Trump's right-hand man behind the executive order that banned people from seven countries from coming into the United States.

"They were in charge of this operation," said a senior official at the Department of Homeland Security. The official added that experts were "almost immediately overruled by the White House, which means by Bannon and Miller."

One of Trump's acts in his first few weeks of office was to appoint Bannon to be a principal on the National Security Council. Trump then "downgraded" his director of national intelligence and the chairman of the Joint Chiefs to be on the same level as Bannon. Both of those positions will now only attend principals meetings.

The order was unprecedented. Never before has a non-military, political advisor been added to a board of military experts that advise the president on the nation’s security.

Admiral Mike Mullen, who served as the Chairman of the Joint Chiefs of Staff under Presidents George W. Bush and Barack Obama, wrote a scathing op-ed in the New York Times denouncing the move.

“Bannon doesn’t belong there,” Mullen said of the promotion. “In my experience, there are very few — if any — meetings of the principals committee at which the input of the military and the intelligence community is not vital.”

3. Bannon mislead Trump about the power he was giving Bannon.

When Bannon was being elevated to a principal position on the NSC, Trump actually had no idea what he was doing. He trusted that Bannon was giving him all of the information necessary to make an educated decision.

According to a New York Times report, Trump had no idea what he was signing. It was only later that he learned about the significance.

Given Bannon's power on the National Security Council, he has the power to overrule the Department of Homeland Security. In preparation for the roll out of the executive order, DHS expressed concern about the executive order because it didn't give exceptions for documented immigrants who have green cards. Bannon personally overruled the DHS decision to grant an exception for green card holders. The NSC ultimately banded together and overruled Bannon, but the weekend after the travel ban took effect meant some green card holders were denied entrance and sent back.

5. His plan for the "deconstruction of the administrative state."

During a discussion at the Conservative Political Action Conference last weekend, Bannon confessed that his chief priority with the president was working toward the “’deconstruction’ of the administrative state.” Essentially, Bannon is admitting that they want to dismantle the government.

That's in keeping with Bannon's philosophy that the only way to achieve meaningful change for conservatives is to bring on a "fourth turning." It comes from a book Bannon has become obsessed with the idea that every 80 to 100 years, the world cycles through a cataclysmic event that upsets the “old ways” of doing things and brings in a new one “in a trial of fire.” He wants to bring about a new cataclysmic event.

Veteran journalist Melinda Henneberger wrote in the Kansas City Star this week that Bannon is the architect behind Trump’s worst impulses. The result has been a series of decisions that has garnered backlash, protests, legal action and more.

The Wall Street Journal agrees. In a Tuesday editorial, the Rupert Murdoch-owned paper blamed Bannon and Miller for Trump’s “biggest mistakes of the first five weeks,” of his presidency. The Journal declared that Bannon will never be able to produce the results that he and Trump are promising. Ultimately, they predict Bannon could even undermine Trump’s entire agenda if he continues on this path.