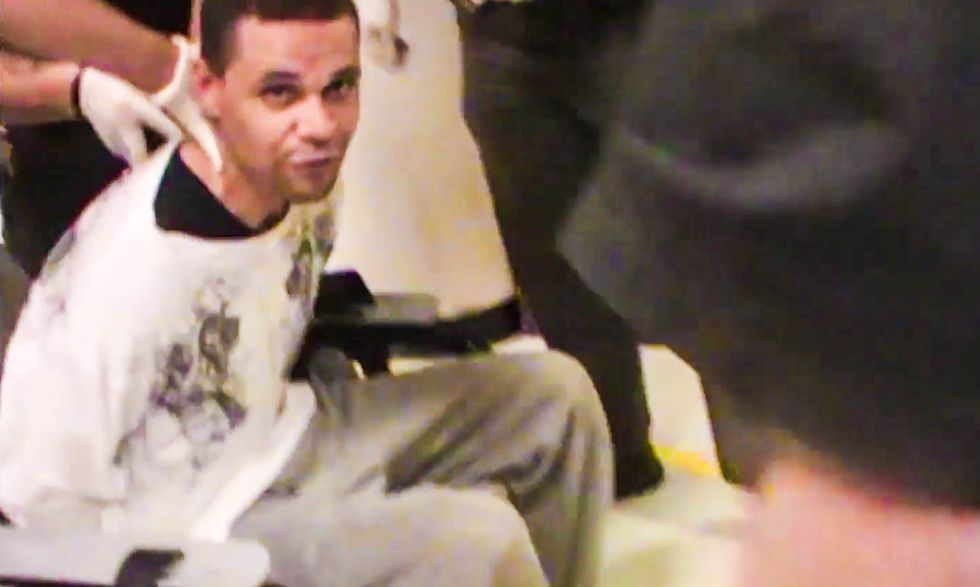 Charles Wade, an Ohio man who was pepper sprayed by police despite being strapped into a restraint chair (Screen cap).

New video has surfaced that shows police officers at the Montgomery County Jail in Dayton, Ohio pepper spraying a black suspect's face despite the fact that they had already strapped him into a restraint chair.

The video, which was obtained and posted by the Washington Post, shows a man named Charles Wade being repeatedly hit with shots of pepper spray to the face while sitting in a restraining chair after his arrest for alleged drunk driving last October.

As he was being sprayed, Wade coughed and repeatedly told the officers that he was having trouble breathing as they told him to "stop resisting."

"I can't breathe, help me please!" he said repeatedly.

The Post notes that Wade this week filed a lawsuit against the Montgomery County sheriff's department with the U.S. District Court in Ohio, in which he alleges the officers employed excessive force during their attempts to restrain him.

The Montgomery County Jail is the same jail that drew heavy criticism for similarly pepper spraying a white woman named Amber Swink, who was sprayed even after being restrained with a seven-point harness.

Montgomery County Sheriff Phil Plummer at the time said that it was wrong to pepper spray Swink while she was restrained, but he called it an isolated incident. Wade's attorney, Douglas Brannon, tells the Post that this new footage shows such incidents are much more common than what the department has let on.

"I think it happened again because there was no discipline handed out to officers involved in abusing Amber Swink," he said. "I think this type of treatment is becoming something that happens with impunity within the Montgomery County jail."