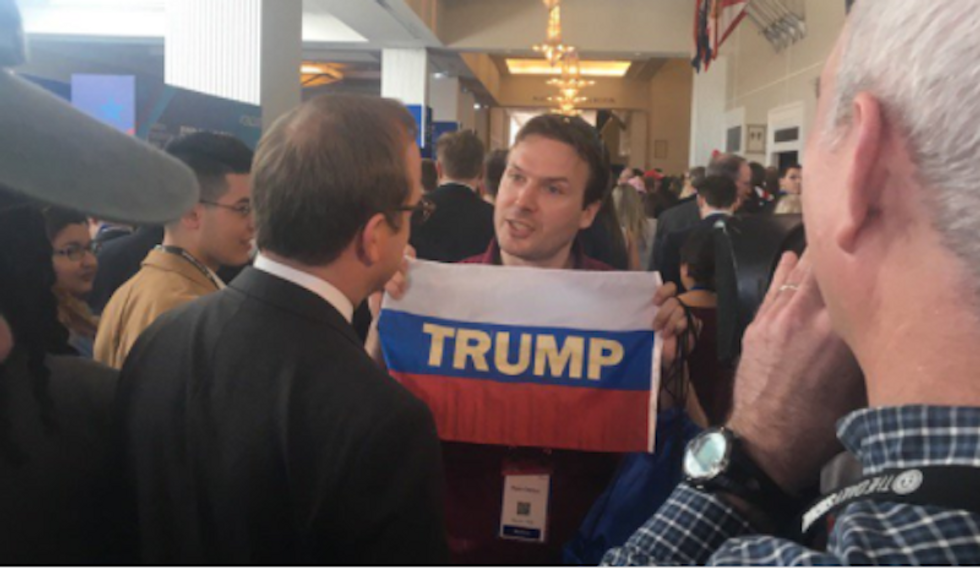 President Donald Trump won't easily avoid protestors during his regime and two of them pulled off a subtle action during the president's speech at Friday's Conservative Political Action Conference (CPAC).

Earlier reports noted staffers were scrambling to do damage-control when they realized attendees were waving Russian flags with "TRUMP" written on them during his remarks. The flags were quickly confiscated but not until after photos had circulated the internet.

The people behind the action were protestors, 22-year-old Jason Charter and 36-year-old Ryan Clayton who managed to pass out nearly 1,000 flags ahead of Trump's speech.

"Most people didn’t realize it was a Russian flag, or they didn’t care," Charter told the Atlantic. Instead of calling it a "false-flag" operation, they called it a "true-flag operation." That's what Clayton told the outlet in a phone interview, "in a thick, mock Russian accent," the Atlantic reported.

"It show how Trump and Russia are so connected, they like peas in pod!" said Clayton, who was quickly escorted from the conference. Charter was able to remain inside the venue longer. He said he was kicked out after heckling the president during his remarks, calling him a fascist and "Putin’s puppet."

"And, I was banned from CPAC," Charter said. "I think there are multiple ways you can resist against Trump, and I think this is one way that’s extremely effective. It’s fun to have a joke sometimes in a very serious situation."

Charter said they will continue resisting Trump as long as they have to, and said jokingly in his fake Russian accent, "Remember, in Trump’s America, flag wave you!"