'Intolerance in practice': Chris Cuomo shreds pundit for fear of transgender 'genitals in your face' 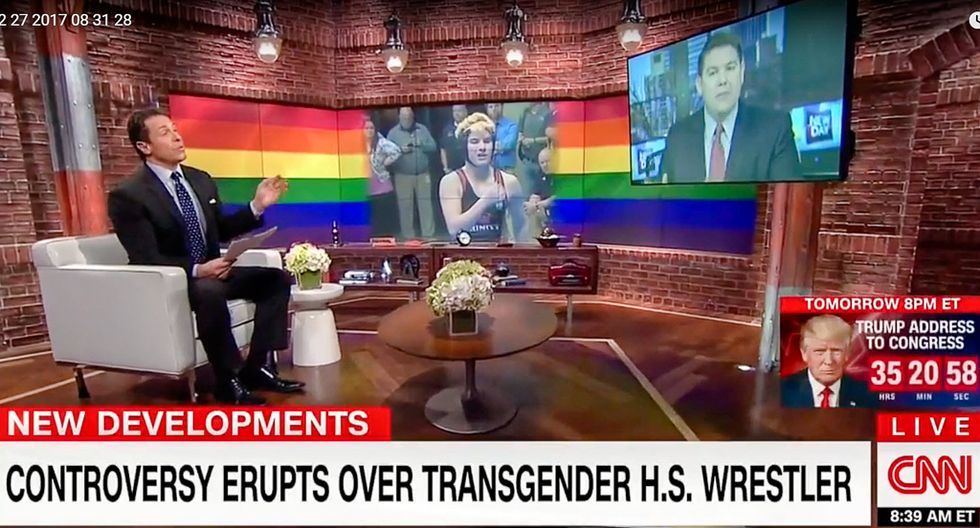 A CNN discussion about transgender rights erupted into a shouting matching on Monday after conservative contributor Ben Ferguson claimed that a Texas transgender student should not be able to wrestle as a girl or a boy.

Following Mack Beggs' Texas high school wrestling girls' state championship win, CNN host Chris Cuomo explained to Ferguson that transgender activists believe the student should have been able to wrestle against boys but the state laws would not allow it.

Cuomo also pointed out that the amount of hormone used by transgender people "is the minimum standard they can give to replicate the output of a boy."

"Scientifically, that is the outcome," Cuomo said. "It you look and do the research as I have, you'll see that. But that's not the issue. The issue is acceptance. If Texas had allowed him to wrestle against boys -- which is what he wants -- we wouldn't be talking about this case right now."

Ferguson argued that it was "not insane or crazy" to make transgender boys wrestle with girls if they were born a female.

"It is illogical to imply that this kid is a victim because he decided to do something and to change something and therefore you change the entire sport around it," Ferguson complained. "If you want to compete in a sport -- period -- then you cannot be taking performance enhancing drugs and do it. But to say we should change the entire way sports is done because of one person and their decision to do something, that is unrealistic."

The CNN host linked the argument about transgender rights in sports to bathroom rights.

Ferguson, however, insisted that conservatives were not worried about having "genitals thrown in your face in a locker room."

"It is not insane or illogical to say, if you are born a boy, you use the boy's restroom," Ferguson continued. "If you are taking testosterone, that is called cheating. And that is the reason why I think it's absurd, we're making such a big issue when the majority of Americans agree with me on this."

"For you to say that there are none of the right to make it about what I'm saying it is, is demonstrably false," Cuomo shot back. "[Conservatives] are saying Cuomo is alright with [genitals waved in your face] because he wants transgender people to have to right to go to the bathroom that they feel comfortable in."

"If you choose to change your identity, that's your decision!" Ferguson shouted.

"This kid should be wrestling boys like he wants to," Cuomo declared. "But this state law is intolerance in practice! They want this kid to wrestle with girls. You don't want the kid to use the bathroom that he wants because you don't like it based on your tradition. I'm saying let the kids go where they want."

Ferguson accused Cuomo of being "intolerant" of people who wanted transgender girls to use the boys locker room.

"You don't always get what you want!" Ferguson yelled. "If you want to go out right now and be in Crossfit for women, should you be able to because you say you're a woman?"

"That's a myth," Cuomo replied. "Transgender doesn't happen on a whim. It's a continuum of time, and hormones and pain and anxiety."

Ferguson asserted that the transgender wrestler "chose to be in this position."

"I feel bad for everybody else that lost to someone that was cheating, using testosterone and not being man enough to admit the fact that you have an unfair advantage," the conservative contributor opined.

"If the kid was allowed to do what he wants, none of this would have happened," Cuomo concluded.