'It's a giant con!': Bill Maher unloads on Trump supporter who asks him to give Trump a chance 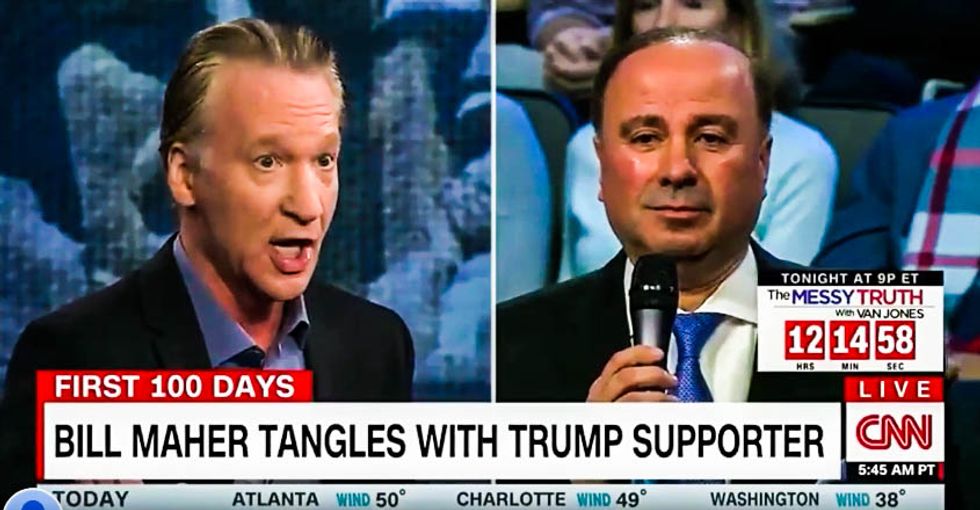 Bill Maher will be appearing with Van Jones during a CNN town hall on Thursday night, and a preview clip released by the network shows the HBO host sparring with a Trump supporter who wonders why Maher won't give the president a chance.

"The president has been in office barely three weeks," said a Trump supporter at the town hall. "Why can't you guys in the media and Hollywood give him some slack?"

"Because of what he's done!" Maher shot back instantly.

"But it's only been three weeks!" replied the Trump supporter.

Maher then went on to break down why Trump has been a disaster who has earned every piece of criticism that he's received so far.

"It's a giant con, what he's done," Maher said. "He ran for the 'little man.' And then what does he do? He gets into office, the coal companies can dump sludge in the river. Because, you know, that's what the 'little man' is aching for. Undoing Dodd-Frank, because so many of the town halls in Appalachia, people were standing up and saying, 'Mr. Trump, please get rid of the Volcker Rule, because if I can't make certain speculative investments, it's killing us here!'"

Maher said that his problems with Trump went beyond his positions on political issues, however -- he said that Trump is simply temperamentally unfit to be president.

"It's beyond politics, it's about sanity," Maher explained. "It's about somebody who makes stuff up, who doesn't read. His information is either anecdotal, or pulled out of his... behind."

Maher pointed out that when Trump falsely claims that millions of "illegal" voters cost him the win in the popular vote, "that should bother you."

Check out the entire clip below.

Democrats in North Carolina want party leaders and outside groups to devote more resources to the state's neck-and-neck U.S. Senate contest, arguing that it presents one of the best opportunities to flip a GOP-held seat in the fast-approaching midterm elections.

"National Democrats are making a big mistake if they're not paying attention to North Carolina."

A new play in London has reinvented France's sainted Joan of Arc as a non-binary icon, who rejects female identity as they struggle to find a place in a man's world.

"I, Joan" had not even been performed at Shakespeare's Globe theatre in August when Time Out magazine called it "the most controversial play of the year".

According to a report from ten Daily Beast's Kelly Weill, the Libertarian Party is experiencing a wave of turmoil as state party officials leave and some chapters collapse due to a turn to the far-right which some members believe now provides a helping hand to the Republican Party.

Central to the descent into chaos is the growth of the Mises Caucus which has taken control of several state committees and pushed far-right policies more in line with Donald Trump than traditional Libertrain sympathies.