Rob Portman won't meet Women's Marchers who paid for tickets: 'He only wants to talk to Republicans' 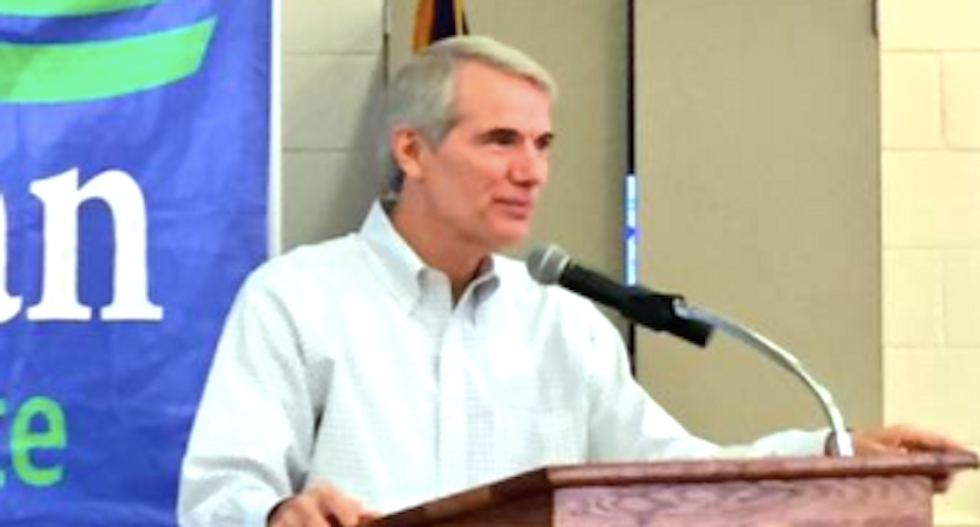 Sen. Rob Portman (R-OH) canceled the tickets of several activists who had paid to attend a Lincoln Day dinner sponsored by the Seneca County Republican Party.

Eight members of the recently formed and Women's March-inspired Seneca County Rising had made reservations for Wednesday's dinner, where Portman was the keynote speaker, but received a notice from PayPal the evening before that their tickets had been canceled and their purchase refunded, reported The Advertiser-Tribune.

One of those activists, Katie Finneran, had taken off work to drive two hours from Ohio State University to hear her senator speak before her ticket was suddenly canceled.

"It's just not fair, because I'm not even a Democrat," the 25-year-old Finneran told the Columbus Dispatch. "Just because Republicans are in power does not mean Republican citizens have more of a voice than Democratic citizens or even independent citizens or Green Party citizens or Libertarian citizens. He represents everybody, not just the Republican Party."

Finneran, a Green Party member from Findlay, said she was upset that Portman hadn't made any public appearances since the November election -- and many constituents have complained they've had difficulty reaching the senator's office.

"If I can't go inside I'll just protest outside," Finneran told the Dispatch. "My mom also bought a ticket separately, and they called my mom and said, 'Well, there's going to be protesting outside.' My mom said, 'I'm 60 years old, I'm not going to go stand outside and protest. I just wanted to sit down and eat a dinner and listen to my congressman.'"

The event's organizers blamed the decision to cancel some tickets on Portman's office.

"It's my personal opinion that these people should be allowed in," said David Koehl, Seneca County Republican Party treasurer. "Portman and his office are afraid protesters will show up. They made this decision a week ago, but several people have been refunded on short notice."

Portman's office did not respond to a request by the Dispatch to comment on Koehl's claim, but the senator addressed the protests -- and his constituents' complaints about his accessibility.

"I think I've had 475 events in Ohio in the last year alone," Portman told WTVG. "I don't know if you'll find any other senator that's been out as much as I have. They have every right to be there and to let their views be heard, and I'm hearing them."

“I’m really afraid,” Brown told The Advertiser-Tribune. “I came from a country where this happened. I came from Germany. I know exactly how these steps went. It’s exactly how they’re doing it here now. It scares me to no end.”

Brown said she hadn't planned on causing any trouble inside the event, and simply wanted to talk to her senator.

“We were not going to make a ruckus, but I guess we’re doing that now,” Brown said. “Portman only wants to talk to Republicans. He wants nothing to do with Democrats.”

Koehl, the local GOP official, complied with Portman's request to cancel the tickets but sent the senator's office a statement expressing his disagreement with the decision.

“While I understand your desire not to let any potential protestors in the room, I’m strongly inclined to believe the Bill of Rights is more important,” Koehl said by email. “We have freedom of speech and freedom of assembly to protect the rights of citizens to speak to their elected officials even if they disagree with those officials — especially if they disagree with those officials.”

But Koehl said he probably wouldn't bring up the matter with the senator personally.