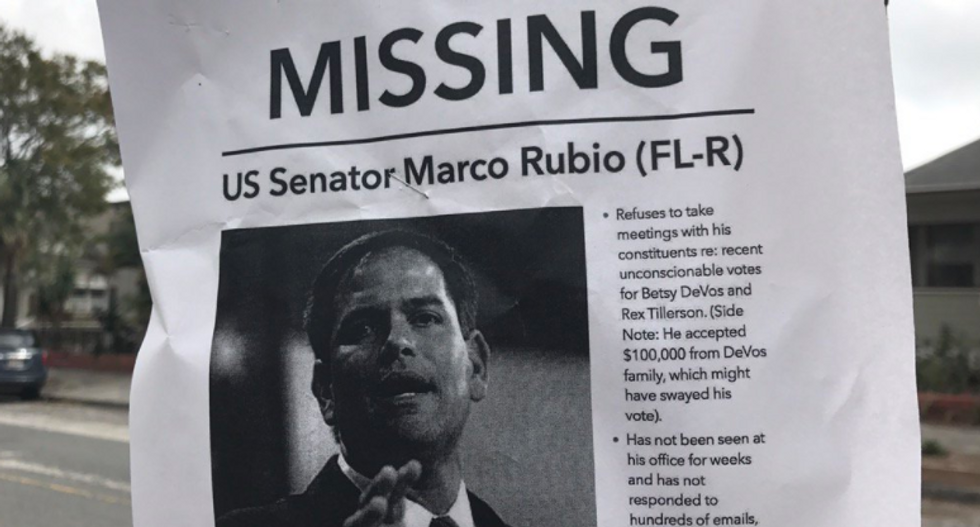 "Missing - U.S. Senator Marco Rubio (FL-R),” the flier reads, with a picture of the Republican senator. The signs add that Rubio “refuses to take meeting with his constituents” regarding his votes in favor of Trump’s Secretary of Education Betsy DeVos and Secretary of State Rex Tillerson.

The fliers also charge Rubio with not responding “to hundred of emails, phone calls and voicemails” and claim he has not been seen in his office for weeks.

Rubio engaged Tillerson in a contentious back-and-forth during the Secretary of State’s confirmation hearing, at one point asking Tillerson if he would label Russian President Vladimir Putin a “war criminal.”

Despite originally sparring with Tillerson, Rubio confirmed the former Exxon CEO, Rubio voted for Tillerson, prompting a Greenpeace activist to protest the Florida senator by holding a spine prop behind him during a press gaggle.

Rubio says he hopes Tillerson is best Secretary of State of all time. Also someone is holding a spine prop behind h… https://t.co/B6ngdehZWZ
— Burgess Everett (@Burgess Everett) 1485210045.0

Rubio also voted to confirm DeVos, despite a massive public campaign to sway the senator’s vote.

A spokesperson for Rubio called the fliers “dishonest,” insisting the group is working from an online activist manual that encourages “mass office calling.”

"Anyone who claims they can't get in touch with Senator Rubio's office is being dishonest,” the spokesperson said. “Our Tampa office only has two employees and serves multiple counties, yet they have met with dozens of these liberal activists.”

“This is nothing more than a strategy outlined in an online activist manual to carry out ‘mass office calling,’” the spokesperson continued. “In the manual, activists are instructed that ‘you and your group should all agree to call in on one specific issue that day.' They are further instructed that ‘the next day or week, pick another issue, and call again on that.' Their goal is to flood offices with calls and emails and then go to the press and claim they aren't getting a response.”

For his part, Rubio and his wife were spotted Wednesday at the White House, dining with President Donald Trump, who used to refer to the Florida senator as “Little Marco.”