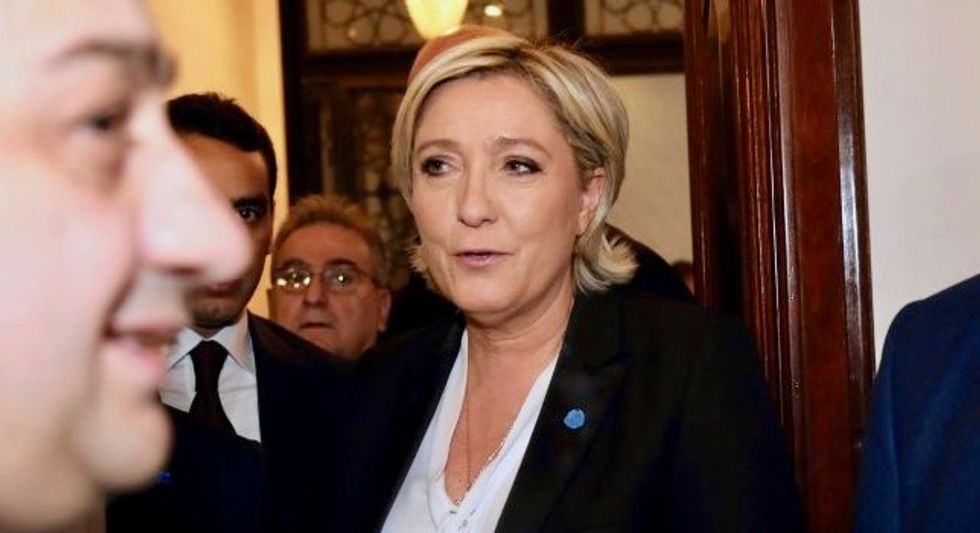 On her last day in the small Mediterranean country, Le Pen arrived at Sheikh Abdellatif Deryan's office in Beirut and was offered a white shawl to cover her blonde hair.

The National Front candidate promptly refused and made a brief statement to journalists before leaving.

"The highest Sunni authority in the world had not had this requirement, so I have no reason to," Le Pen said, referring to her 2015 visit to Al-Azhar, the prestigious Egyptian institution of Sunni Islamic learning.

She said she had told Deryan's office on Monday that she would not don a veil: "They did not cancel the meeting, so I thought they would accept that I will not wear the scarf."

In a statement on Tuesday, the body said "its press office had informed the presidential candidate, through one of her assistants, of the need to cover her head when she meets his eminence, according to the protocol assumed by Dar al-Fatwa".

"Dar al-Fatwa officials were surprised by her refusal to conform to this well-known rule," the statement said.

Fewer than a dozen protesters gathered near Lebanon's  Zaytuna Bay on Tuesday afternoon to protest against Le Pen's visit.

"From Beirut to Damascus to Paris to Washington, fascists flock together," one placard read.

One banner read "Fascists out!", and demonstrators carried pictures of Le Pen and US President Donald Trump.

Tuesday is Le Pen's last day in Lebanon, where she met a foreign head of state for the first time -- President Michel Aoun.

Islamic dress is a hot-button issue in France, where the full-face veil is banned in public places.

"A magnificent message of liberty and emancipation sent to the women of France and of the world," Philippot wrote on Twitter.

Shunned by European leaders over her party's stance on immigration and its anti-EU message, Le Pen's meeting with Aoun aimed to boost her international credibility.

France had mandate power over both Lebanon and Syria during the first half of the 20th century.

Le Pen has met few top foreign officials since taking control of the FN in 2011. German Chancellor Angela Merkel has refused to meet with her.

She is also set to meet Samir Geagea, who heads the Lebanese Forces party and is a fierce opponent of Syrian President Bashar al-Assad.

In an interview with Lebanon's L'Orient-Le Jour, Le Pen called Assad "the lesser evil" compared to the Islamic State jihadist group in Syria.

She has also criticised the EU's calls for Assad to stand down after nearly six years of war that have left more than 310,000 people dead.

"Marine Le Pen's statements in Lebanon are an insult to the Lebanese people and the Syrian people," wrote Lebanese Druze chief Walid Jumblatt on Twitter.