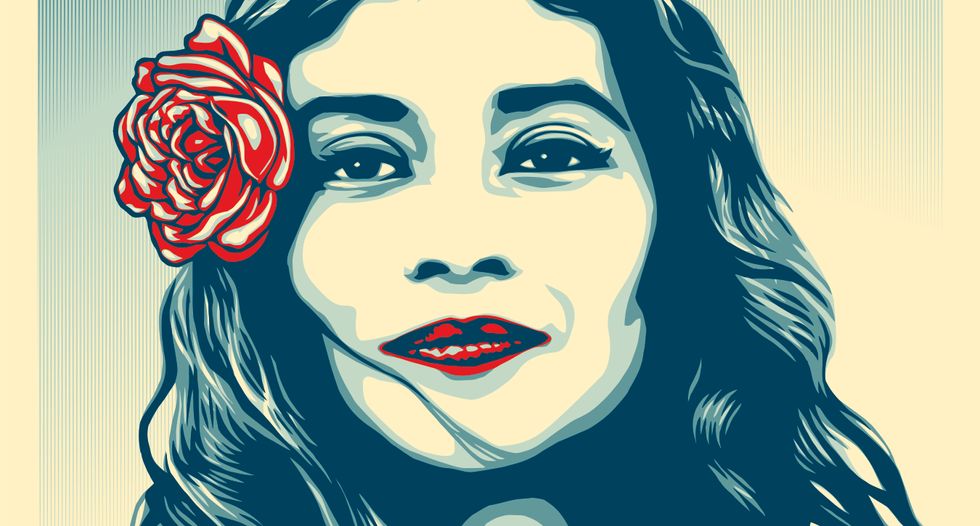 Teachers at a public high school in Maryland were forced to remove pro-diversity posters because the administration deemed them anti-Donald Trump, the Huffington Post reports.

Administrators at Westminster High School asked several teachers to take down “We the People” posters hanging in their classrooms; the iconic design, by artist Shepard Fairey, features a Muslim, Latin and African-American woman in red, white and blue. Fairey was also the artist behind the Barack Obama’s 2008 “Hope” poster.

Carey Gaddis, a spokeswoman for Carroll County Public Schools, told the Carroll County Times the school asked teachers “to take them down” after at least one teacher complained, “because [the posters] were being perceived as anti-Trump by the administration.”

Gaddis said after researching the posters, they determined the images were political by nature. The county does not allow teachers to put up political posters “unless it’s part of a curriculum and they represent both sides.

Aaron Huey, a photojournalist who collaborated with Fairey on “We the People” said the posters are “definitely NOT anti-Trump in nature.”

“Anyone who believes that these messages are dangerous or divisive needs to check themselves,” he added.

Steven Johnson, the Carroll County assistant superintendent for instruction, told the Huffington Post the issue is the “symbolism” they represent, comparing the posters with the Confederate Flag.

“The Confederate flag in and of itself has no image of slavery or hatred or oppression, but it’s symbolic of that,” Johnson told the Huffington Post. “These posters have absolutely no mention of Trump or any other political issue, it’s the symbolism of what they were representing. They were carried in these protests.”