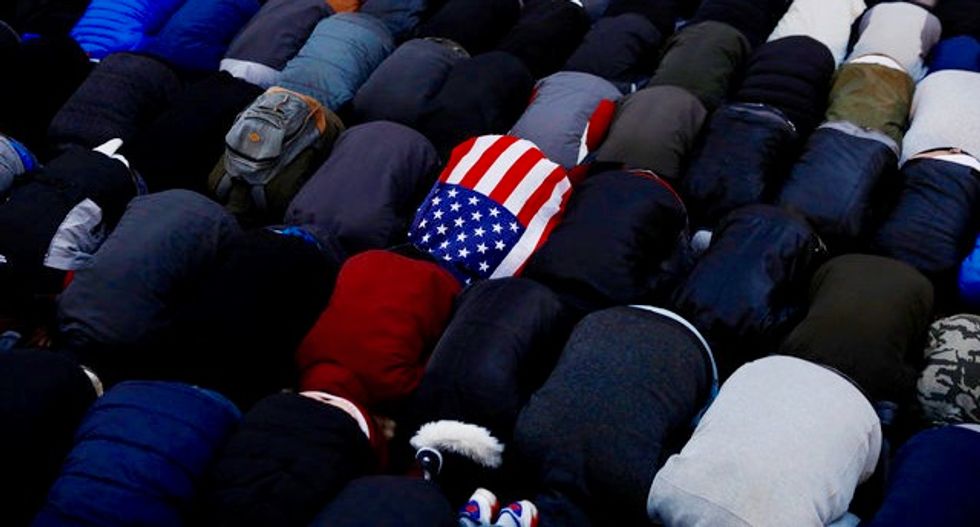 Demonstrators pray as they participate in a protest by the Yemeni community against U.S. President Donald Trump's travel ban in the Brooklyn borough of New York, U.S., February 2, 2017. REUTERS/Lucas Jackson

The hearing was the first on Friday in a series of legal challenges to the measure the new Republican president signed last week, which blocked people holding passports from Iran, Iraq, Libya, Somalia, Sudan, Syria and Yemen.

The order also temporarily stopped the entry of all refugees into the country and indefinitely halted the settlement of Syrian refugees.

Federal judges in Seattle and Virginia on Friday will also weigh lawsuits filed by different states and advocacy groups challenging the order.

Early on Sunday, a magistrate judge in Boston issued an injunction that for seven days blocked enforcement of the order, which the White House has contended is necessary for national security.

"Where does it say Muslim countries?" U.S. District Judge Nathaniel Gorton on Friday asked Matthew Segal, an attorney with the American Civil Liberties Union (ACLU) representing the plaintiffs in the Boston case.

"If your honor's question is, 'Does the word 'Muslim' make a profound presence in this executive order?,' my answer is that it doesn't," Segal said. "But the president described what he was going to do as a Muslim ban and then he proceeded to carry it out."

Gorton shot back, "Am I to take the words of an executive at any point before or after election as a part of that executive order?"

Massachusetts anti-poverty group Oxfam and seven Iranian nationals have joined a lawsuit asking Gorton to extend the injunction forbidding the detention or removal of approved refugees, visa holders, and legal permanent U.S. residents who entered from the seven countries.

The initial ban on permanent residents, or green card holders, was one of the most confusing elements in the executive order signed on Jan. 27. But, following an outcry and legal challenges, the Department of Homeland Security said on Sunday that green card holders would be allowed on planes to the United States and would be assessed upon arrival.

Press responded that the list had come from a law passed in 2015 and amended early last year requiring that citizens of the seven countries apply for visas to enter the United States, "out of concern about the refugees that were coming, mainly from Syria at that time and terrorist events that were occurring in Europe."

The order caused chaos at U.S. airports last weekend, with some travelers abroad turned back from flights into the United States and crowds of hundreds of people packing into arrival areas to protest the policies.

Trump has told a Christian broadcaster that Syrian Christians would be given priority in applying for refugee status in the United States.

The challenges to his order focus on religion because the Establishment Clause of the U.S. Constitution prohibits the federal government from favoring one religion over another,

In Seattle, the states of Washington and Minnesota were together asking a judge to suspend the entire policy nationwide, which would represent the broadest ruling to date against Trump's directive.

Should the Seattle judge rule that Washington state and Minnesota have legal standing to sue, it could help Democratic attorneys general take on Trump in court on issues beyond immigration.

During his campaign, Trump discussed the idea of temporarily banning Muslims from entering the country to protect against terrorist threats. On Thursday, he defended the restrictions as necessary to protect religious liberty.

A Virginia judge on Friday will consider whether to allow that state's attorney general to intervene in another court challenge there.