Michael Nutter: Kellyanne Conway should do Trump 'a favor' and follow Flynn out the door 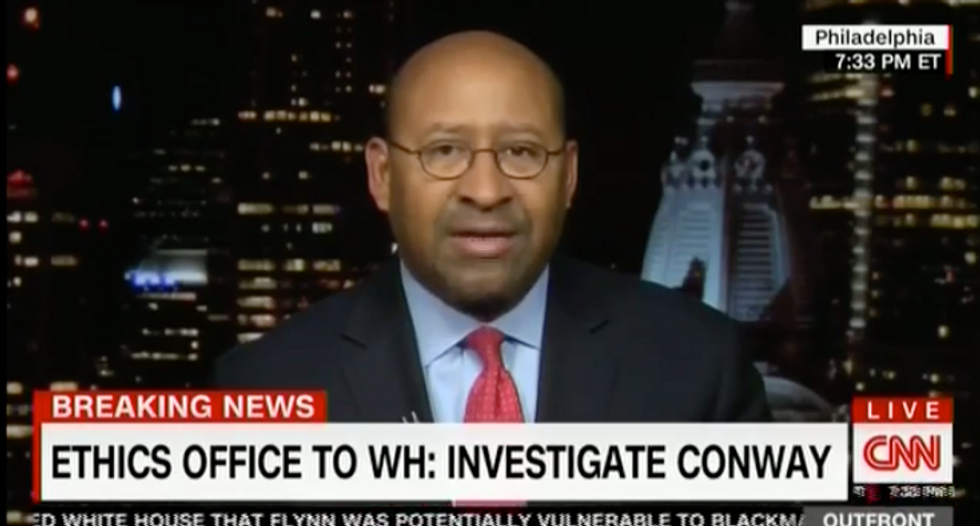 As part of the fall-out over the resignation of National Security Adviser Mike Flynn, the former mayor of Philadelphia said President Donald Trump needs to unload senior adviser Kellyanne Conway as long as he is cleaning house.

“But campaigns are different than governing,” he continued. “As some say, the streets weren't made for everybody. that's why they made sidewalks. Kellyanne needs to get on the sidewalk.”

Nutter added he thinks Conway “has damaged her own credibility,” adding she’s likely “hurting the credibility of President Trump and causing massive problems within his own administration.”

“She serves at the pleasure of the president,” Nutter said. “She should do the president a favor and resign herself.”

Alice Stewart, a longtime friend of Conway, disagreed with Nutter, saying the top advisor has been “extremely loyal to the president.”

“She is certainly not in the understanding that her job is in jeopardy, as it should not be, because she has been doing a good job for the president and will continue to do so,” Stewart said.

Jen Psaki, a former aide to President Obama, agreed with Nutter that Conway is damaging her credibility.

“I think credibility is more important than loyalty,” Psaki said. “And your job as an adviser to any president is to tell them when the strategy is off, tell them when something isn't going well—even if it involves you.”

Stewart tried to argue that the the administration has been busy “with regard to executive orders” and fulfilling “campaign promises” noting the pace has led to some “confusion” surrounding exactly when Flynn lost the “full confidence of the president”—something Conway insisted the former national security advisor enjoyed mere hours before his resignation.

“That’s completely contradictory to what [the administration is] saying today, which is that it was a gradual eroding of trust over the past 13 days,” Burnett said.

“At that time he had the full faith and confidence of the president but it was such a fluid day and everything was changing by minute,” Stewart said. “After she said that was when clearly they were looking at it more closely and shortly after that was when Flynn decided it was just too much of a distraction and it was time for him to step down.”

“I have to say, if that is actually the case, that is terrifying,” Burnett replied.

“This is a whole lot of hogwash here,” Nutter concurred.