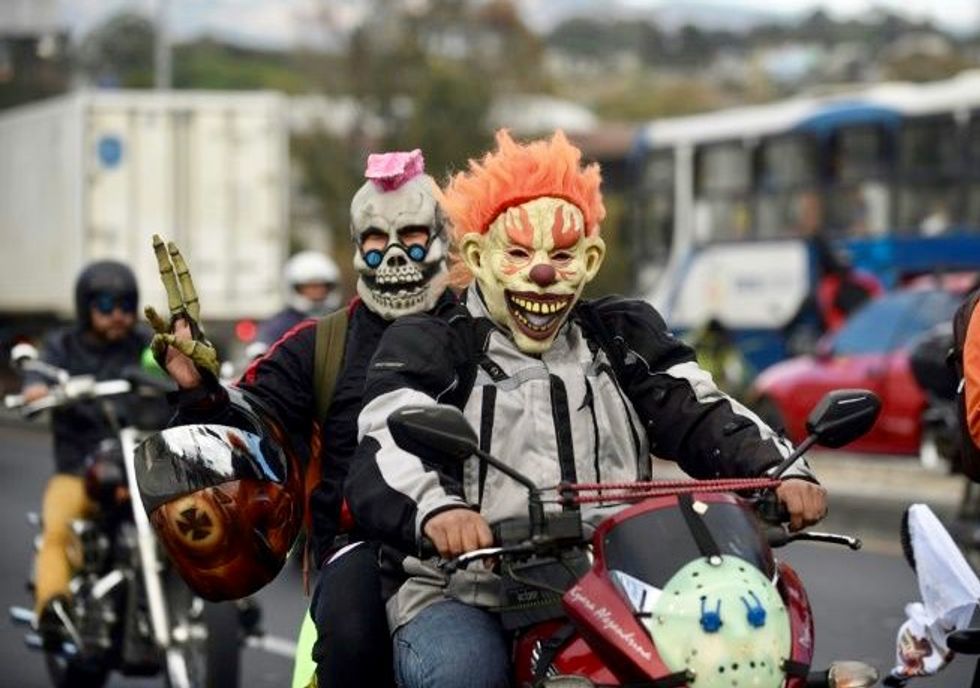 Bikers set out in a convoy from Constitution Square in Guatemala City to Esquipulas, 222 km to the east, to visit a 16th-century carved black statue of Jesus in a basilica, on February 4, 2017

Some 30,000 motorcycle-riding Catholics left the Guatemalan capital Saturday on a pilgrimage to the eastern city of Esquipulas to venerate the so-called Black Christ.

The 140-mile (222-kilometer) journey ends with the devout paying homage to the Black Christ, an aged wooden likeness of Jesus grown dark over centuries.

The image is worshiped by Guatemalans, other Central Americans and some Mexicans.

The first such ride took place in 1961, when a motorcyclist and fervent believer in the powers of the Black Christ -- one Ruben Villadeleon, nicknamed "Zorro" -- took the ride with a handful of friends.

The shrine and the city attract a huge influx of pilgrims and tourists every year.

President Jimmy Morales gave the signal to start this year's motorized pilgrimage. Participants left from Guatemala City's Central Plaza for Esquipulas, which Pope John Paul II declared in 1996 to be the "Central American Capital of Faith."

Organizers of the Caravan set up four stops along the way for riders needing refreshments or mechanical assistance, seven check-in points and four rest stops. Most of the riders were planning to return home on Sunday.

Although the voyage began as a family tradition, most participants now are messengers or collection agents -- among other professions that use motorcycles -- who travel east in hopes of receiving divine favors.

Dozens of people don costumes for the ride. This year one dressed as US President Donald Trump and another as his predecessor Barack Obama, according to photos in the local press.

In 2015, organizers attempted to set a Guinness record for the largest motorcycle caravan in the world, but failed to meet all of Guinness's requirements.

Guatemala gave the caravan national-heritage status in 2011 due to its huge popularity.