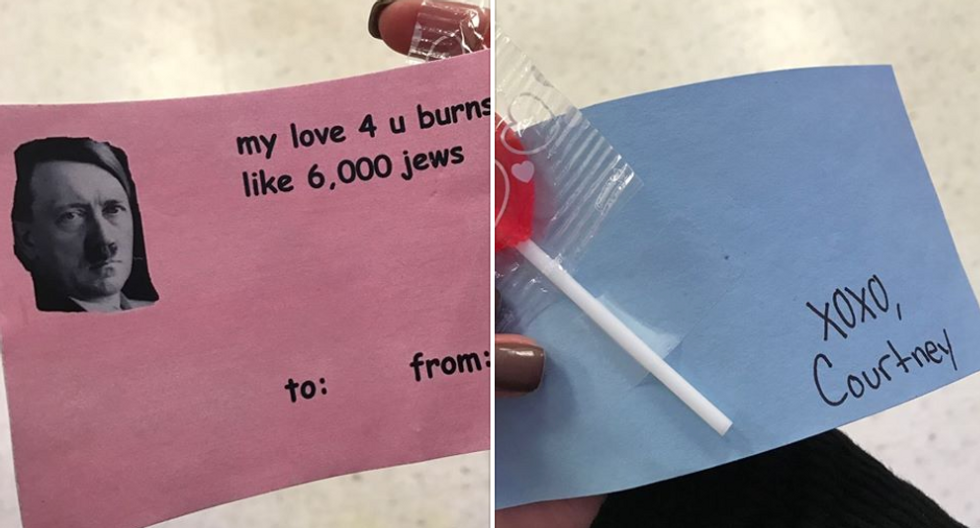 The Central Michigan University College Republicans on Wednesday hosted a Valentines Day party featuring anti-Semitic cards handed out by a member of the organization, the Morning Sun reports.

In a Facebook post, the college Republicans apologized for the card, blaming the situation on “a card placed into a bag without other members’ knowledge.”

“At tonight’s College Republican meeting, we had a Valentine’s Day party, in which each member decorated a bag and other members placed valentines inside of others’ bags. Unfortunately, a very inappropriate card was placed into a bag without other members’ knowledge,” the apology reads.

“A bag was then given away to students sitting in Anspach [Hall], once again without members’ knowledge of its contents. The College Republicans as an organization did not distribute this valentine. We in no way condone this type of rhetoric or anti-Semitism. We apologize for any offense, and want students to know that we do not tolerate this sort of behavior.”

In a statement, University President George Ross said while the students’ “offensive language” is protected by the First Amendment, the Valentine’s Day card “is unacceptable” and “not consistent with our values and standards.”

“We caution against concluding that the action is representative of the entire student organization or its members and remind all that threatening others as a result of such an incident can have legal consequences,” he added. “We once again urge each of our students, faculty and staff to be beacons of peace, respect, inclusivity and civility — to be role models of integrity, dignity and leadership.”

In an interview with the student paper, CMU’s College Republicans president Mackenzie Flynn denied knowledge of the card, and pointed out the bags were intended for members only.

"While still not appropriate, I want to clear up that they did not create it themselves," Flynn said.