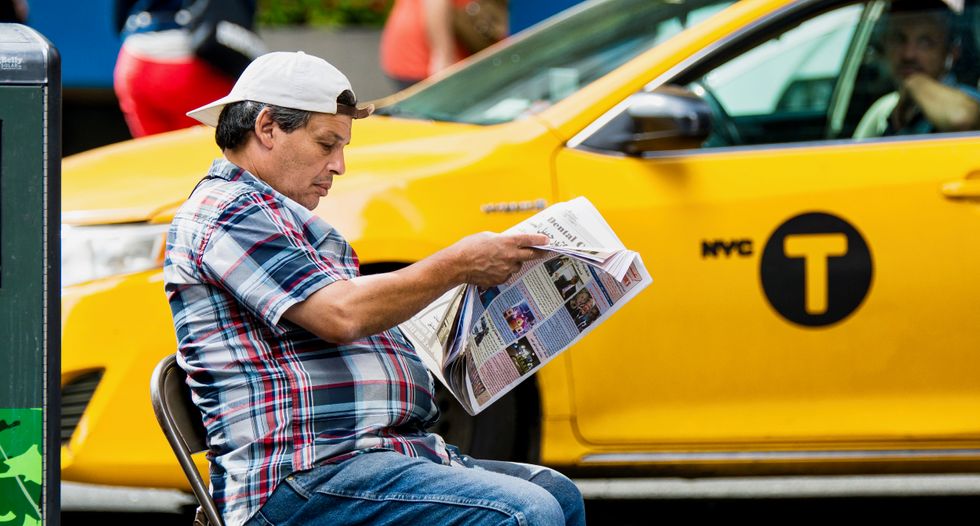 The Trump administration's combative view of traditional news media as the "opposition party" and "fake news" is turning out to be the best hope in 2017 for newspapers struggling to attract more digital readers and advertisers.

The New York Times , the Financial Times, The Wall Street Journal and Gannett Co are building on the online readership they gained during the 2016 presidential election by marketing unbiased reporting as a sales strategy.

The risk, however, is whether those new readers will attract advertising dollars to the newspapers, some of which have been criticized for having political leanings. An Edelman survey of more than 33,000 people in 28 countries shows trust in the media is at an all-time low at just 35 percent.

So far, there is reason for optimism among newspaper executives and investors. The New York Times, which President Donald Trump has referred to as "failing" in his Twitter messages, added a record 276,000 digital news subscribers in the last quarter and sees digital ad revenue up 10 to 15 percent in the current quarter. The company said it expects to add 200,000 digital subscriptions to its news products in the first quarter.

The Wall Street Journal added 113,000 digital subscriptions in its latest quarter, an almost 12 percent jump. The company said that January's numbers were even higher, but it declined to provide figures.

In addition to the proliferation of "fake news" websites that publish false stories for propaganda purposes, another challenge for traditional media is hostility from Trump who has on occasion described their reporting as "fake news." Republican Trump's close adviser, Stephen Bannon, told The New York Times in an interview in January: "The media's the opposition party" and not the Democratic Party.

To win over advertisers and readers' trust, The Wall Street Journal ran ads online and in print during the election. One featured a pin ball machine with the tagline, "No Tilt. Campaign coverage that's on the level."

The paper has run ads after the election to highlight its content as "created, curated and checked in a real newsroom."

The New York Times, which is focused on increasing its subscriber revenue, in January launched its "Truth" campaign consisting of online ads urging readers to sign up because, "Truth. It needs your support."

The newspaper sees an opportunity in making sure readers understand that it is fair and accurate and plans to launch another marketing campaign in coming weeks, Chief Executive Officer Mark Thompson said on the company's last earnings call.

The Financial Times is running its "Facts. Truths." campaign promoting its coverage of the election and now the Trump administration.

Gannett, which rebranded its publications under the "USA Today Network," has used the election to highlight it has journalists at local newspapers across the United States, said Andy Yost, chief marketing officer at Gannett.

Divisiveness stirred by the election campaign has made brands avoid publications that appear to be politically aligned, said Natalie Prout, a strategist at Phenomenon, a Los Angeles-based branding agency.

For example, there is a heightened understanding in the wake of November's election that if a brand buys an ad in The Huffington Post, for example, it could be perceived as supporting a liberal agenda, Prout said.

Brands are also worried about their ads showing up in what is perceived as "fake news," so they are exercising more caution when using programmatic advertising, where they automatically buy digital ad spots through a third party.

But growing digital subscribers can help attract advertisers to other areas, such as conferences, said Suzi Watford, chief marketing officer of Dow Jones, which includes The Wall Street Journal.

WASHINGTON (Reuters) - Hyatt Hotels Corp called symbols of hate "abhorrent" on Sunday after the design of a stage at the Conservative Political Action Conference at one of its hotels drew comparisons to a Norse rune used by Nazis during World War Two. High-profile Republicans including former President Donald Trump are attending the four-day event in Orlando, Florida, as conflict rages between Trump allies and establishment politicians trying to distance the party from him. A photo of the CPAC stage went viral on social media on Saturday, with thousands of Twitter users sharing posts comparing...

US doubles down on protecting university research from China