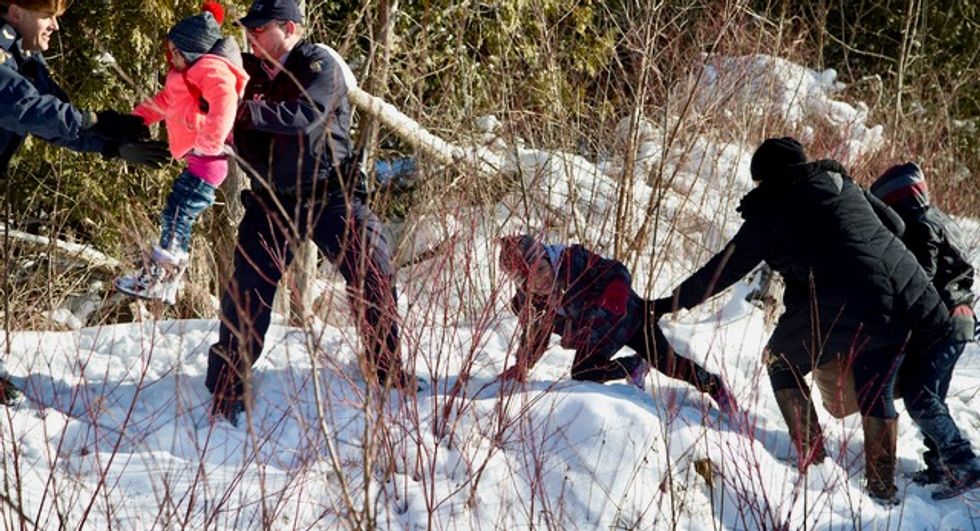 Royal Canadian Mounted Police (RCMP) officers assist a child from a family that claimed to be from Sudan as they walk across the U.S.-Canada border into Hemmingford, Canada, from Champlain in New York. REUTERS/Christinne Muschi

Nine asylum-seekers, including four children, barely made it across the Canadian border on Friday as a U.S. border patrol officer tried to stop them and a Reuters photographer captured the scene.

As a U.S. Customs and Border Patrol officer seized their passports and questioned a man in the front passenger seat of a taxi that had pulled up to the border in Champlain, New York, four adults and four young children fled the cab and ran to Royal Canadian Mounted Police on the other side.

One by one they scrambled across the snowy gully separating the two countries. RCMP officers watching from the other side helped them up, lifting the younger children and asking a woman, who leaned on her fellow passenger as she walked, if she needed medical care.

The children looked back from where they had come as the U.S. officer held the first man, saying his papers needed to be verified.

The man turned to a pile of belongings and heaved pieces of luggage two at a time into the gully -- enormous wheeled suitcases, plastic shopping bags, a black backpack.

"Nobody cares about us," he told journalists. He said they were all from Sudan and had been living and working in Delaware for two years.

The RCMP declined on Friday to confirm the nationalities of the people. A Reuters photo showed that at least one of their passports was Sudanese.

The man then appeared to grab their passports from the U.S. officer before making a run for the border. The officer yelled and gave chase but stopped at the border marker. Canadian police took hold of the man's arm as he crossed.

The border patrol officer told his counterpart that the man was in the United States illegally and that he would have detained him.

Officers on both sides momentarily eyed the luggage strewn in the snow before the U.S. officer took it, and a walker left on the road, to the border line.

The RCMP carried the articles to their vehicles, and the people piled in to be driven to a nearby border office to be interviewed by police and to make a refugee claim.

People seeking refugee status have been pouring over the Canada-U.S. border as the United States looks to tighten its policies on refugees and illegal immigrants. Asylum-seekers sneak across because even if they are caught, they can make a claim in Canada; if they make a claim at a border crossing, they are turned away. [L1N1FO1Z8]