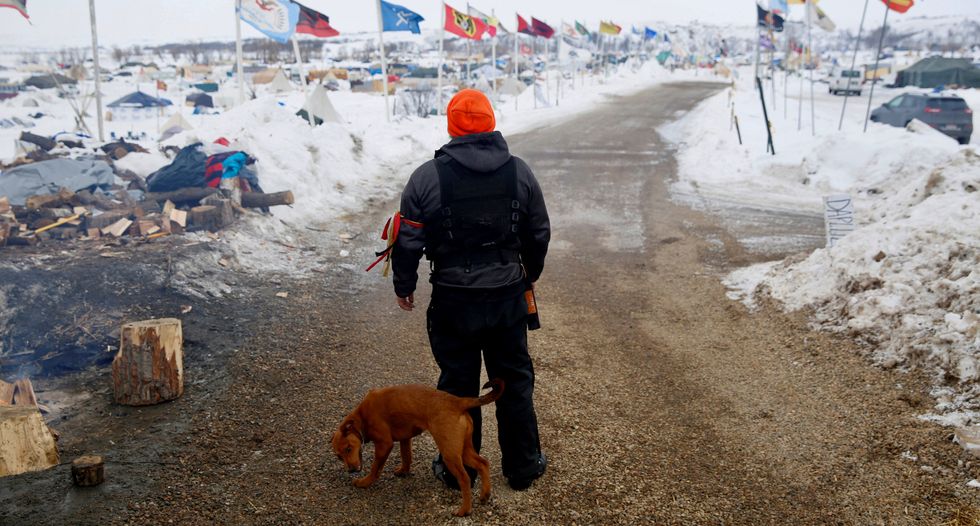 The leader of a Native American tribe attempting to block the Dakota Access oil pipeline said on Wednesday the Standing Rock Sioux Tribe may have exhausted legal options to stop the project after the company building it won federal permission to tunnel under the Missouri River.

Legal experts agreed the tribe faces long odds in convincing any court to halt the $3.8 billion project led by Energy Transfer Partners LP, which could now begin operation as soon as June.

The U.S. Army said on Tuesday it would grant the final permit for the pipeline after an order from President Donald Trump to expedite the project. The army owns the land through its Corps of Engineers.

"We're running out of options, but that doesn't mean that it's over," David Archambault II, chairman of the Standing Rock Sioux Tribe, told Reuters in a telephone interview. "We're still going to continue to look at all legal options available to us."

Opponents called demonstrations against the pipeline in New York, Washington and San Francisco for later on Wednesday.

Tuesday's announcement dealt a major setback to Native American tribes and climate activists who have vowed to fight the pipeline, fearing it will desecrate sacred sites and endanger drinking water. Supporters say the pipeline is safer than rail or trucks to transport the oil.

The 1,170-mile (1,885 km) line will move crude from the shale oilfields of North Dakota to Illinois en route to the Gulf of Mexico, where many U.S. refineries are located.

Public opposition to the pipeline has drawn thousands of people to the North Dakota plains, including high-profile political and celebrity supporters. Large protest camps popped up near the site, leading to several violent clashes, including one incident where protesters burned vehicles, and another when police fired water cannons on activists in sub-freezing temperatures. Over the last several months, more than 600 people have been arrested.

The opposition sensed victory last year when the administration of former President Barack Obama, a Democrat, delayed completion of the pipeline pending a review of tribal concerns and in December ordered an environmental study.

But those fortunes were reversed after Republican Trump took office on Jan. 20. Trump issued an order on Jan. 24 to expedite both the Dakota Access Pipeline (DAPL) and to revive another multibillion-dollar oil artery: Keystone XL.Obama's administration blocked that project in 2015.

In a court filing on Tuesday, the Army said it would allow the final section of the DAPL to tunnel under Lake Oahe, part of the Missouri River system. The permit was the last bureaucratic hurdle to the pipeline's completion.

With liberal activists marching in the streets to protest Trump on issues such as immigration and women's rights, the victory for Trump and the pipeline will present a significant challenge to opponents who have lined up against the new president.

The tribe said on Wednesday it would attempt to use a "legal battle and temporary restraining order" to shut down pipeline operations.

But Wayne D'Angelo, an energy and environmental lawyer with Kelley Drye & Warren in Washington, said he believed the Trump administration was on "pretty solid legal ground."

The tribe would have to prove a very difficult standard: that approval for the pipeline was "arbitrary and capricious, an abuse of discretion or inconsistent with the record before the agency," D'Angelo said.

The protest camps dwindled after the Obama administration ordered the environmental review in December as the tribe urged people to leave due to concerns about trash buildup in a flood plain.

But a few holdouts have remained, including some who braved temperatures of minus 9 degrees Fahrenheit (minus 23 C) on Wednesday.

Two men gathered around a wood stove said they were discouraged by the setback but hoped demonstrations in other parts of the country would galvanize the opposition.