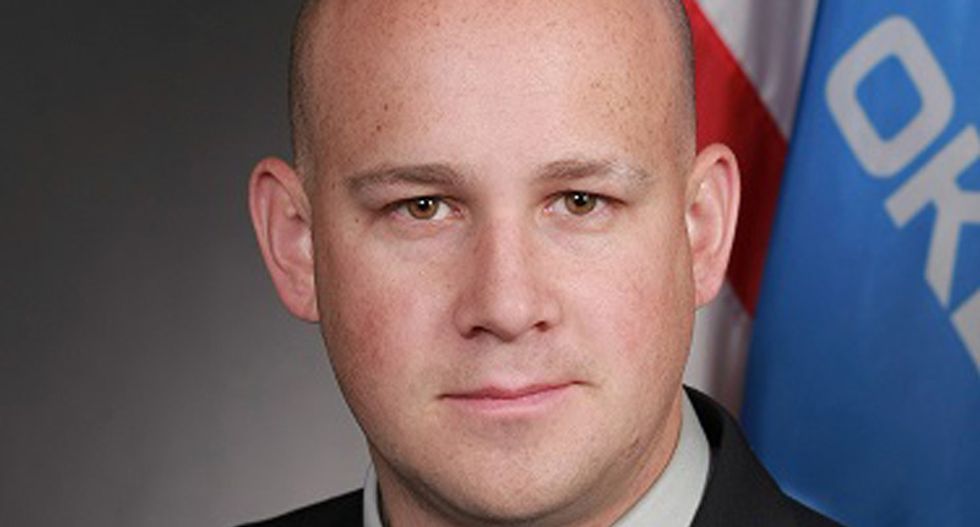 A new bill proposed in the Oklahoma legislature would define the medical procedure for any pregnancy termination as criminal murder. The law also doesn't provide any accommodations for a mother whose life and health is at risk if there are complications from the pregnancy.

The bill comes from Republican state Sen. Joseph Silk, who is known for a series of anti-choice antics at the Oklahoma state capitol while lobbying for a prohibition on abortion in the state's Constitution. He's affiliated with a group Abolish Human Abortion, known for harassing women who volunteer at clinics, hanging huge banners over overpasses and standing outside of polling places with signs purporting to show fetuses.

There is little in the bill other than it would name the medical procedure "murder." The law would charge the doctors that perform the abortions with first-degree murder, but it doesn't outline if any charges would be filed for the woman seeking the procedure. Punishments for women could be the same as criminal prosecution for an accessory to the crime. That would mean if a woman is dying as a result of a pregnancy with complications and has an abortion she could be thrown in jail along with the doctor who refused to let her die. First-degree murder in Oklahoma is punishable by the death penalty, so the doctors would be put to death under the so-called pro-life law.

"We either protect life as a state, or we don't," Silk told Oklahoma's KTUL. "A 4-week-old fetus in the womb is no different than a 1-year-old child."

In an interview with Raw Story, Democratic State Rep. Monroe Nichols explained that the law is so far outside of the mainstream that conservative Gov. Mary Fallin (R-OK) vetoed similar legislation last year.

"I believe strongly that we should all be working to reduce the number of abortions," Nichols said. "But they should be safe and legal. The fact is, abortions are down nationally and that's because of education and availability of contraception, both things many conservatives would like to see us backtrack on."

Nichols similarly told KTUL that the rate of unwanted pregnancies is down as well as teen pregnancy.

"And it's not because we filed some unconstitutional piece of legislation," he continued. "But because we found ways to come together and make sure the type of education and type of resources are out there to help people through that."

Silk justifies his bill on the grounds of his own moral beliefs.

"As a legislator, my primary goal is to protect innocent life through the bills that I author," Silk also explained. A fact-check, the oath of office in Oklahoma does not include a vow to "protect innocent life" though it does mandate all legislators pledge to uphold the Constitution of the United States and the State of Oklahoma.

Nichols told KTUL that the law is absolutely unconstitutional. Passage would likely result in another costly lawsuit for a state that has spent millions to defend right-wing laws over the last several years.

The Oklahoma ACLU has vowed to fight the legislation if it is enacted.

“I think, anytime that you take away a woman's autonomy and say that she is incapable of making the most basic and fundamental decisions about herself and her reproductive health and her reproductive freedom, that's misogynistic,” ACLU Executive Director Ryan Kiesel told KFOR.

Silk also made a name for himself by pushing legislation for Oklahoma to secede from the United States even after President Donald Trump took office. He filed a bill to make it legal to discriminate against LGBT people and is behind the Oklahoma version of the anti-transgender bathroom bill. He has ties to the anti-LGBT group the Family Research Council, which is listed by the Southern Poverty Law Center as a hate group.