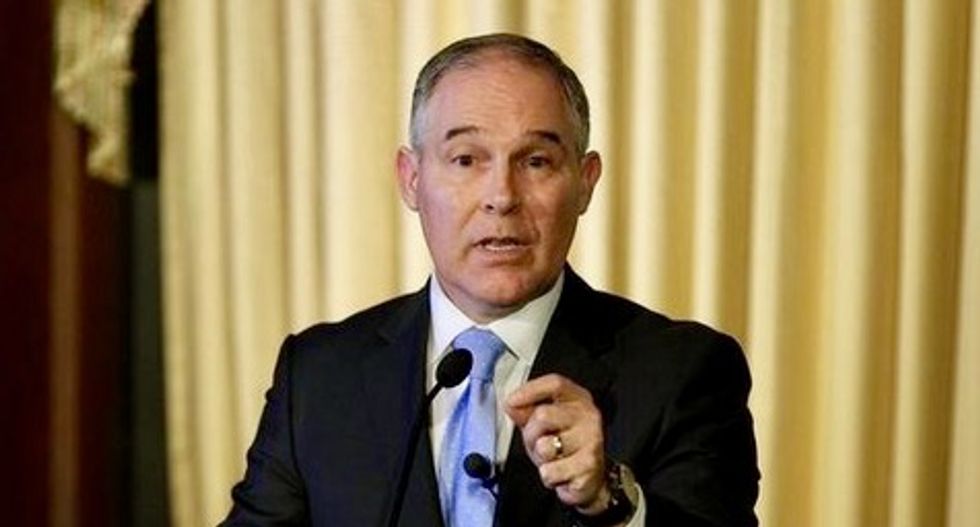 Emails released by the Oklahoma attorney general's office show a cozy relationship between energy companies and Scott Pruitt, who was the state's top prosecutor before being sworn in last week as the new chief U.S. environmental regulator, a media watchdog group said on Wednesday.

The Center for Media and Democracy has sought the release of emails between energy companies and Pruitt for the past two years, saying they show energy companies drafted language that Pruitt's attorney general office then used in suing the U.S. Environmental Protection Agency, the office he now heads, over regulations on energy operations.

The center had sued Pruitt on Feb. 7, ahead of the Senate vote to confirm his nomination by President Donald Trump, to release the records detailing his communications with energy companies.

The attorney general's office released more than 7,500 pages of emails late on Tuesday, holding back an unknown number of documents it called exempted or privileged. Oklahoma Judge Aletia Timmons is reviewing those documents, but there is no set time for when or if they would be released.

The EPA and Devon did not immediately respond to requests for comment.

Nick Surgey, a research director at the Center for Media and Democracy, called the document release a "major breakthrough" that revealed a close and friendly relationship between Pruitt's office and the oil and gas industry, with frequent meetings, calls, and dinners.

The center said before the release of the emails that Pruitt's office had violated Oklahoma's Open Records Act by delaying their issuance.

Critics of Pruitt's nomination to head the EPA were concerned over his record on the environment - he sued the agency more than a dozen times on behalf of his oil-producing state and has doubted the science of climate change - and Democrats in the Senate held an all night debate last week trying to stop his confirmation vote until the emails were released. He was confirmed on Friday with two Democrats from energy-producing states voting for him.

A spokesman at the Oklahoma attorney general's office would not say how many documents were sent to the judge for review or how it decided which ones to fully release. The office went "above and beyond" what is required under the Open Records Act by producing records that would typically be considered ones outside the law's scope, the office said in a release.