One month in, anti-Trump movement shows signs of sustained momentum 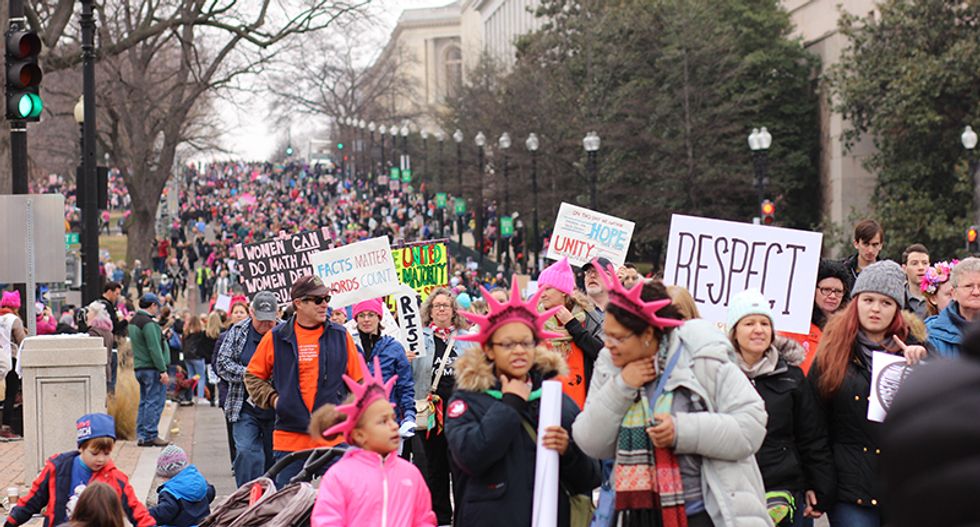 U.S. Representative Leonard Lance, who has held more than 40 town hall-style meetings with constituents in his central New Jersey district, has never faced a crowd like he did on Wednesday.

The Republican endured catcalls, chants and caustic questions from more than 1,000 residents at a local college, while hundreds of others outside brandished signs with messages like "Resist Trump."

Parallel scenes have played out across the country this week during the first congressional recess since Donald Trump became president. Republican lawmakers returning home confronted a wave of anger over a spectrum of issues, including immigration, healthcare and Trump's possible ties to Russia.

The raucous meetings are the latest in a relentless series of rallies, marches and protests that shows no signs of abating more than 30 days into the new administration.

The anti-Trump energy has prompted talk of a liberal-style Tea Party movement, in reference to the protests in 2009 that helped reshape the Republican Party and arguably laid the groundwork for Trump's surprise electoral victory last year.

"Some of the lessons to draw from that are persistence, repetition, not taking 'no' for an answer," said Victoria Kaplan, the organizing director for the grassroots progressive group MoveOn.

Since the day after Trump's inauguration, when millions of protesters joined women's marches worldwide, left-wing organizers have sought to harness that anger to fuel a lasting political campaign.

Hundreds of progressive groups have sprung up across the country - some affiliated with national organizations like Indivisible or MoveOn - to help coordinate.

At town halls in New Jersey and Virginia this week, constituents came armed with red "disagree" signs they held aloft to register their disapproval of what they heard from their representatives.

Some U.S. senators, such as Pat Toomey, Republican of Pennsylvania, have faced weekly protests outside their offices, and a Pennsylvania healthcare network set up a "town hall" this week with an empty suit in place of Toomey, who declined to attend.

More marches are scheduled across the country in the coming months, including several major events in Washington, tied to gay rights, science and a push for Trump to release his tax returns.

The sheer volume of protests - last week, there were three nationwide calls for action within a five-day span - has some political observers wondering how long it can last.

But several experts who study protests said the level of outrage may be increasing, rather than subsiding, after a tumultuous first month in which Trump's words and actions created fresh outrage among liberals almost daily.

"We're not anywhere near reaching a saturation point for protest," said Michael Heaney, the author of "Party in the Street: The Antiwar Movement and the Democratic Party after 9/11" and a University of Michigan professor. "If anything, it's just getting started."

The key for organizers is to convert large-scale protests into sustained action by building databases of names and encouraging locally based events, experts said.

"You can't just have the diehards," said Dana R. Fisher, a University of Maryland professor who studies collective action. "And then you need to channel them into new types of activism."

When Fisher surveyed participants at the women's march in Washington, she found one-third were attending their first protest - the highest percentage she has ever observed.

"This is unprecedented," she said. "But there's nothing that's not unprecedented about the Trump presidency."

Some Republicans have dismissed the protests as manufactured. Trump on Tuesday tweeted that "so-called angry crowds" in Republicans' districts were "planned out by liberal activists."

But Kaplan of MoveOn said the vast majority of actions were "organic." A weekly conference call the group hosts to discuss the movement has attracted a bigger number of participants each week, with 46,000 people joining the latest discussion.

"We are firing on all cylinders to catch up" with grassroots protests, she said. "That is a demonstration of energy and sustainability."

In what Kaplan said was a sign the protests are having an impact, many Republicans have eschewed town halls this week to avoid confrontations. There were fewer than 100 in-person Republican town halls scheduled for the first two months of the year, compared with more than 200 in the same period in 2015, according to a Vice report.

In Louisiana on Wednesday, residents shouted down Republican Senator Bill Cassidy as he tried to explain his healthcare proposal. Scott Taylor, a freshman Republican representative in Virginia, sparred with hundreds of impassioned constituents on Monday at his own event.

Like Lance, whose district voted for Hillary Clinton over Trump, Taylor is already a midterm target for Democrats. Taylor said in an interview after the town hall that he recognized many of the attendees from the local Democratic Party.

"It's not like they're just some new organic people who just came about and are concerned," Taylor said.

But not everyone was a Democrat. Austin Phillips, a 22-year-old Trump voter, told Taylor at the town hall he was worried about losing healthcare coverage if Obamacare is repealed.

"Trump has talked about wanting to repeal it," Phillips, who is self-employed and purchased insurance through an exchange created by the law, said in a later interview. "If they quickly repeal it with no replacement lined up, then theoretically everybody would lose their insurance."