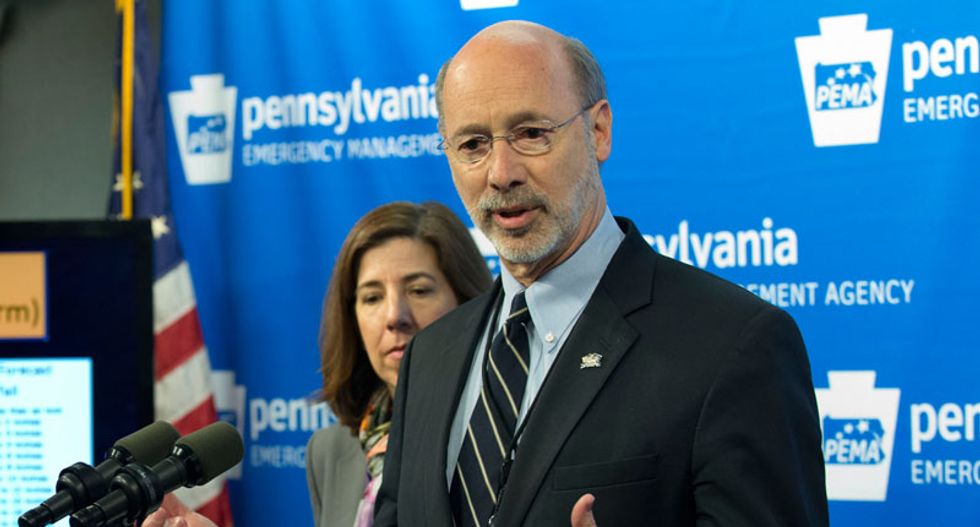 Pennsylvania Gov. Tom Wolf on Tuesday proposed a $32.3 billion state budget for fiscal 2018 that seeks to reduce an estimated $3 billion structural deficit through $2 billion in spending cuts and $1 billion in revenue enhancements.

His plan would not, however, raise the personal income or state sales taxes, proposals in his previous budget addresses that failed after resistance from the Republican-controlled legislature.

"I'm offering a budget proposal that represents a responsible solution to our deficit challenge, and a different approach from the way things have been done in Harrisburg for almost a generation," said Wolf, a Democrat, in his address to the legislature.

His revenue enhancements include a removal of special interest exemptions to the sales tax, including for pre-made airplane meals sold to airlines, aircraft maintenance and repair, and business storage.

Wolf also hopes to get $200 million from a leaseback deal for the Pennsylvania Farm Show Complex & Expo Center in Harrisburg.

Cuts target different areas, including a $31 million annual appropriation for the University of Pennsylvania School of Veterinary Medicine and $50 million of student transportation reimbursements made possible by lower gas prices.

Combining four state agencies into the Department of Health and Human Services will save another $91 million.

Republicans said they appreciated Wolf's attention to cutting costs but questioned proposals for one-time revenues and the apparent lack of solutions for the state's underfunded public pension system, growth in Medicaid spending and long-term spending.

Wolf also suggested imposing a $25 fee per resident in municipalities that use the state police for local law enforcement. Currently, they are paid for through the gasoline tax.

In addition, he proposed lowering corporate taxes beginning on Jan. 1, 2019 to 8.99 percent from 9.99 percent, currently the second-highest rate in the country.

Budget Secretary Randy Albright said in a briefing with reporters that the lower tax rate would be offset by the elimination of the so-called Delaware loophole - when Pennsylvania corporations avoid corporate income tax by setting up a holding company in Delaware, which does not have the tax.

Wolf's spending plan is $571 million, or 1.8 percent, above the current budget and must be approved by lawmakers before the July 1 start of the fiscal year.

(Reporting by David DeKok in Harrisburg; Editing by Hilary Russ and James Dalgleish)